In the closing shot of the 2012 Avengers film – a groggy Iron Man (Robert Downey Jr), seconds earlier laid flat on the ground gently by Hulk at the fag end of Iron Man’s death defying – straight to earth fall, says to the rest of the concerned Avengers grouped around him ‘ I’m ready for a Shawarma. How about you guys? I know a great place’. And the rest is history for the Sharwarma place that slow cooked its meat with delicate Arab flavours. If the Avengers can enjoy a Shawarma after ‘Saving the Earth’ so can you, was the babble as fans and foodies scrambled in hordes to the small joint.

This scene flashed by when we, a motley crew of school mates and spouses, sat back and relished every morsel of ‘Authentic Malayalee Food’ curated from the menu especially for us and served up with their amazing combos at Kappa Chakka Kandhari, the restaurant everyone is raving about in Koramangala, Bangalore. The Avengers of Trinity Lyceum (Our School in Kollam) had finally found their Kerala flavours of home. Their search had ended.

These were more than just a bunch of school mates. More than 40 years ago, we knew every Jackfruit, Mango and coconut tree by shape and location. And some of these guys were inmates in the boarding school or as day scholars in Kollam, Kerala. The fruits of trees in and around the school boarding – Chakka, Manga or Thenga (both tender and full grown coconut) found their way into our young bellies after adventurous group tree climbing no warden could ever see. 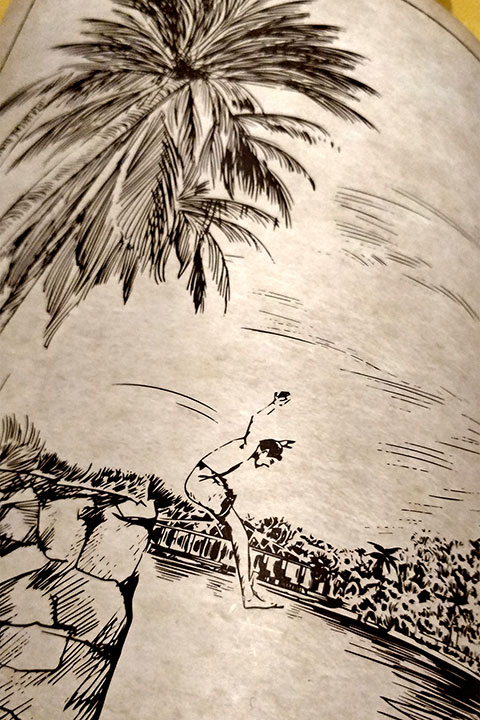 Being day scholars living with our grandmother, my younger brother and me had our special benefits. All our meals were from home. After breakfast, cycle to school. Cycle back home for lunch and another lazy evening cycle ride back home. It only struck me a few years ago, my grandmother was cooking up breakfasts, lunches, tea time snacks and dinner for me and my brother. Every day.

With our home by the sea, fish was the staple diet. The Moringa (Drum stick) tree in the compound was a perennial provider. The drumsticks during their season or their tender leaves when the moringa season was over. The drumsticks floated in dark roasted coconut or bright yellow ground coconut fish curries jostling with slices of tender mango also from the home compound grove. The leaves were sliced finely into a coconut thoran or floating on top of a ‘Pulisseri’ (slightly sour, thick buttermilk cooked with cucumber). The Chakka or Jackfruit tree was the uncrowned king of the backyard. Dark green leaves that doubled as spoons for eating Kanji (Rice broth), the removal of a Jackfruit’s individual fleshy insides was a sight to see. Hands soaked in coconut oil would painstakingly pull out the fruit one by one, avoiding the sticky sap. Raw, they would go into turmeric yellow chakka curries, ripe they would end up as dessert, jams or payasams. The seeds would be laid out to dry and one day when the Jack season was over, the roasted seeds appeared in thorans or stir fried delicacies. No one bought Jackfruit, drumsticks, Papaya or coconuts from the local vegetable market. Every house in our neighbourhood had them in abundance. Not to mention the customary extras that came in sacks from grandmother’s family home. There was never a shortfall in the kitchen inventory of home grown stuff. My personal favourite was when the ‘friendly neighbourhood tree climber and experience maker’, came on his rounds and offered me a tender coconut just off the tree he had effortlessly climbed. He just slit the top off the tender coconut with the skill of a samurai. No straws needed. You just titled it back gulped all that heavenly water down till he later scooped out that flesh for you to eat with the dark jaggery that grandmother brought our from her larder. 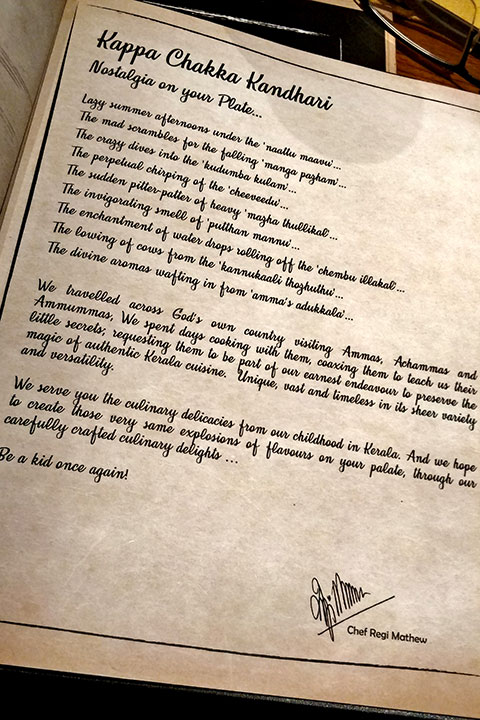 The Restaurant’s name brought us back as school kids to a home compound. Swaying palms, rustling drumsticks and home cooked Tapioca (Kappa) with spicy, green crushed kandhari (tiny but explosive green chilli) with small onions in coconut oil accompanied by fresh fish from the shoreline in a fiery, red curry.
‘NOSTALGIA ON YOUR PLATE’ was their tagline. For us it was trip back to a Kerala home kitchen.

A brainchild of Regi Mathews (Chef and Co-Owner) it looked to us as more of his masterpiece. His recipe bank of over 800 odd recipes collected over a 3- year period when he and his co-owner friends visited home kitchens and Toddy shops of Kerala (250 and 70 nos respectively) gave him a total insight into the ingredients and processes followed over time in these hallowed kitchens. His ingenuity is how he has skillfully replicated these time tested, iconic Kerala home kitchen recipes in flavourful offerings on every KAPPA CHAKKA KANDHARI table.

The buzzing, packed restaurant with folks lounging outside, waiting to get a taste of what is on offer is sign enough to say that this place is here to stay.

This food experience got us all nostalgic with the flavours and ingredients we all grew up with and our tongues went on overdrive. As I write about it now, I realized I had to start from the end to the start of the meal, like schoolboys recollecting their lives from now to then.

The grand finale, unplanned as it was, had Regi Mathews walking up to our table with his hands delicately cupping a candle lit on top of a terracotta bowl which he gently placed on our table. After gently blowing out the single candle, the birthday gal opened up the lid and poured out white, Kerala Payasam.

As we lapped up the slow cooked horsegram in sweetened milk and cardamom, it was hard for us not to visualize ourselves in a Kerala home celebration. Back in our school days, there were no candlelit cakes for birthday celebrations at home. Just home-cooked sweets or payasam. Full marks to Chef Regi for this unique, nostalgic but celebratory touch. 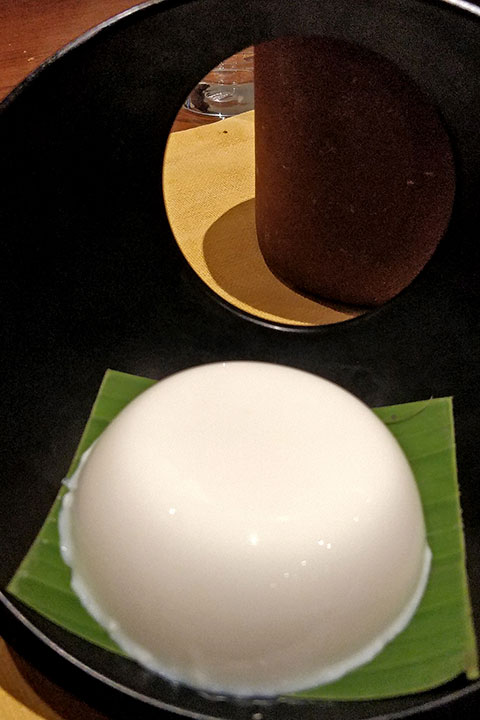 Minutes before was when we got to taste KCK’s signature dessert dish. The Cloud pudding. From the first taste, we were hooked. The wiggly wiggly tender coconut and thick coconut cream pudding was heavenly. ‘Out of this world!’, said my school mate as he downed his Cloud pudding. Regi told us he renamed the iconic ‘Tender Coconut Pudding’ to Cloud, bowing to the request of young millenials who had tasted this at KCK’s Chennai outlet launched a couple of years ago. And rightly as he pointed out to us, most of the customers were youngsters who were the real fans.

To match the Cloud Pudding, there was the Kandhari icecream.
A Chilli Chiller. As the cold cream flavours and coats your tongue, the Kandhari slow burns upward from your throat. Brilliant!

The greatest decision that night was that we unanimously agreed not to order anything from the menu and gave Regi an ‘open ticket’ to serve us whatever he felt would give us a KCK experience best. Like a seasoned circus ring master, he let us have his spread of delicacies in various combinations.

The Ramasseri idli (a rare but iconic dish available only in Palghat) steamed to perfection in the traditional way using circular wooden discs on which the idli batter was poured on cloth and then covered with a rounded terracotta pot.

The large, flat but soft Ramaserri idlis were the ‘appams’ for the night. The vegetarians had it with a banana and pineapple pachadi while the pure non-vegetarians dipped the idlis in classic, fiery red Alleppy fish curry.

The other main act was balls of rice flour cooked in coconut milk accompanied with a traditional, dark peppery chicken curry. As fast as these rice balls disappeared, came the popular Kerala banana fry (fritters) and juicy beef curry. A combo you have to taste to believe, and getting to be a rage in Kerala too.

Regi was just getting into the act!

There was the classic mutton curry with rice, delicately fried fish with pepper and gooseberry, squid fried just right with fiery red marinade. 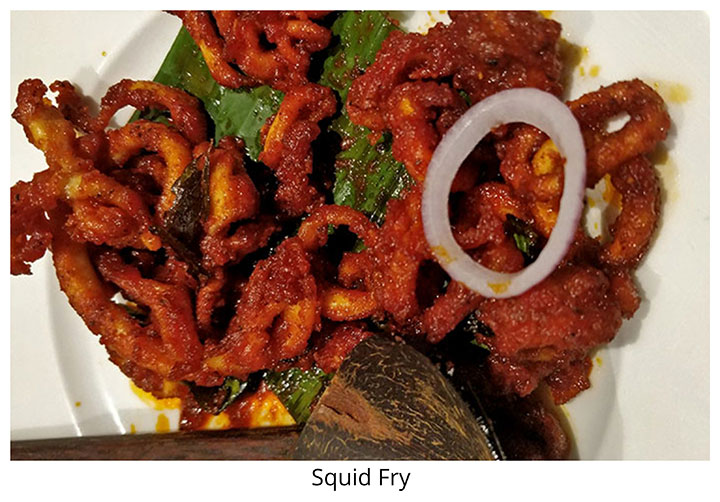 This feast started with prawns and coconut, knotted up in a banana leaf ‘Kizhi’. 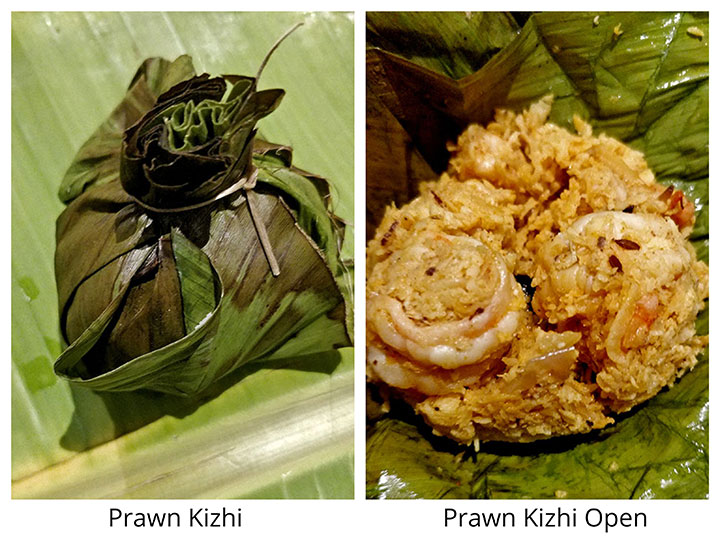 All Mallus who have had meals wrapped in a banana leaf would recall the subtle flavours. To top it all, this was an original home recipe. Just as we opened up the kizhi and tasted the perfectly cooked prawns and coconut, came the tiny fried mussels or ‘ Kakka Erachi’. This was my home town favourite.

I was hooked with visions of lakes, sea shores and the art of getting the bits of flesh out of the tiny shells of mussels. 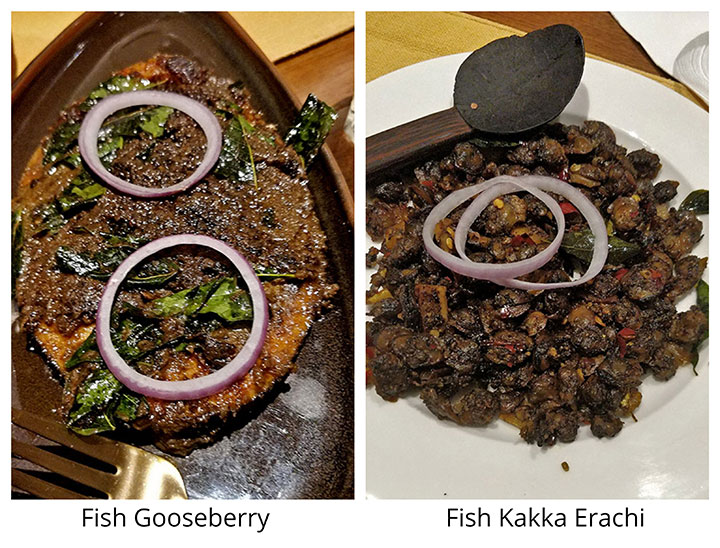 How it all started was with Regi’s insistence on us having his specialized, signature drinks.
‘Bring them on’, we said.

High Range Mafia (green with mint, honey and tea), Sasparella with Khus Khus and the ‘Absolut Kandhari’ in a glass a wee larger than a shooter. One sip and the refreshing fresh lemon won’t get you. The blended Kandhari will.A single Kandhari chilli floats around like a tiny, green missile warning. 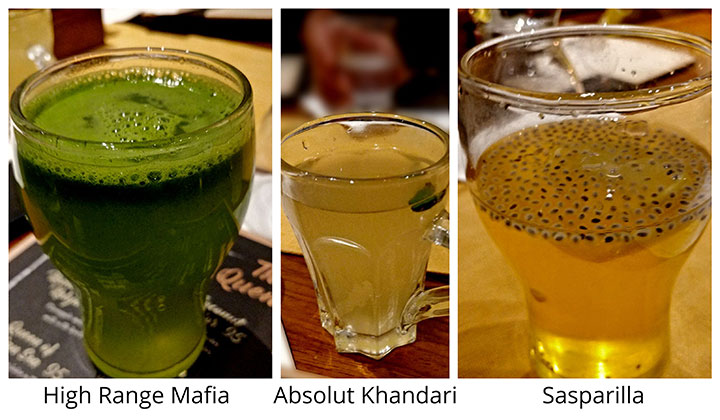 An Absolut Kandhari kicked off our foodie experience and we wound up with a Kandhari Ice cream at this laid back but popular place where the focus is purely on enjoying a Kerala food experience. No pressure cooking, no fancy ovens.

Every dish is cooked the traditional way in an open to see kitchen. And moreover, every ingredient is handpicked and sourced from Kerala home grown gardens or plantations.

Like cloud storage now, this memorable food experience at Kappa Chakka Kandhari was (to use my schoolmate’s words) simply out of this world! 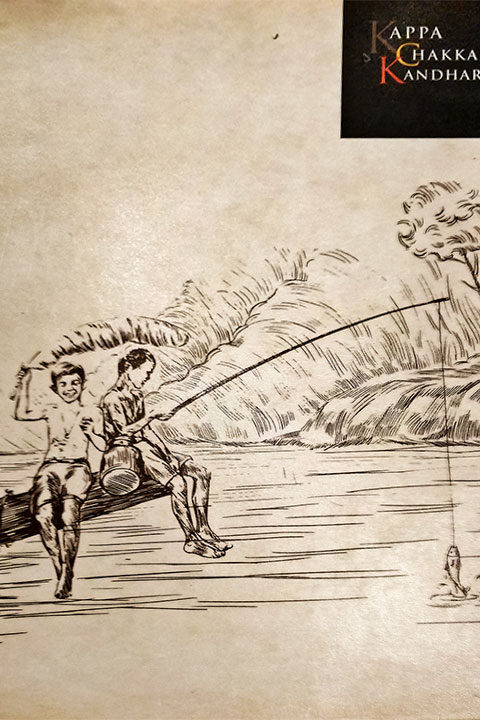 Bring Switzerland in your kitchen with some scrumptious Alpine delicacies!

7 Unmissable Things to do in Frankfurt.

Hack your brain with this ONE Minute Experiment.

Love Is In The Air At Atlantis, The Palm!

TDB CAREER DESK
1
You’re fresh out of college, graduated with oodles of knowledge and the zeal to do something huge is what every twenty year old has...

Dealing With A High Heel Hangover?

Travel Accommodation On A Budget

Beet It! Meat It! Mutton Chukander By Monu Danesh Surendran