All About Asthma: Causes, Symptoms & Treatment

Tips from Personal Trainers You Need for Success 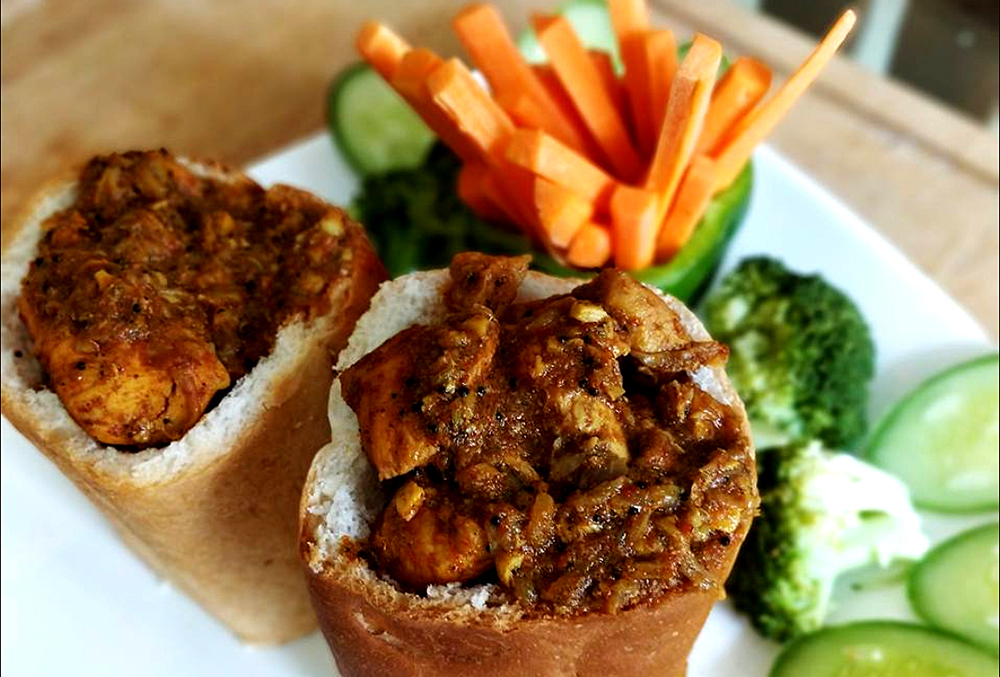 This dish according to me is a true, classic fusion dish. Created in Durban, South Africa by Indian labourers who were brought to work in NATAL’s sugarcane fields.

The word “Bunny” comes from “Bania”- the Indian businessmen who sold the curry, while “Chow” is of course slang for “Food”.

In the early days when ‘Roti & Beans’ was the go to dish for Indian labourers, the roti used to fall apart. So, ingeniously bread was scooped out to fill the beans inside and Bunny Chow was born. It took a long time for bread to be accepted in place of the roti.

It has been a local South African delicacy since 1940 with the hollowed out bread filled with a range of ‘Curries’ and ‘Beans’. Designed to be eaten with the hands – starting with the ‘Virgin’ scooped out bread and ending with the juicy, curry soaked bottom.

Bunny Chow was the ingenious way to sell food to black people who weren’t allowed to eat in restaurants during Apartheid. The bread was used as a holder, a plate, or a take-out container handed out through the sides and back doors of restaurants so that nothing needed to be returned after eating. The other story of the Bunny Chow goes that it was the food of the caddies at the Royal Golf Course in Durban. As most of the caddies were residents of Grey Street which happened to be the Indian quarter of the Central Business District in Durban, they could not find time to go for lunch and be back to the course on time. So they requested their friends to bring along lunch in the form of Bunny Chow so saved on containers for the food to be carried back and forth. Yet another story claims that it was created by a chef at the KAPITAN’S restaurant located then on the corner of Victoria and Albert street in Durban.

Staying true to tradition though with a twist, here I have used the traditional Kerala Mutton Curry that goes into the scooped out loaves of bread (Courtesy Thoms Bakery) sided with carrot sticks, capsicum and steamed broccoli with pickled red chillies. 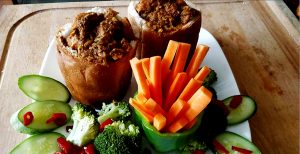 Final tip:
You must eat Bunny Chow with your hands. You wouldn’t ask a New Yorker to use a fork and spoon with apizza, would you?
Happy Chowing!

PREPARATION MUTTON CURRY
Heat coconut oil in a cooker and when hot, add the sliced onions..
Saute for a while and add green chilies, crushed ginger garlic and perum jeerakam powder (fennel seed powder) to it.
Again saute for few minutes and when nicely browned, add the diced tomato.
Close the lid for a while and then add the cleaned mutton to it.
Mix well and cook for some time.
Now add turmeric powder, coriander powder, chilly powder, pepper powder and salt.
Mix well and close the lid. Add a cup of water.
After 4 whistles switch off the flame, let it rest for few minutes.
Then open the lid, transfer to a pan and slow cook for a few minutes to thicken the gravy.

FINAL TEMPERING
Heat coconut oil in a frying pan and add the mustard seeds.
After the mustard seed start cracking, saute the sliced small onions(shallots) and when done toss in the
curry leaves and chopped coriander leaves.
Pour this over the curry.

SERVING BUNNY CHOW
Cut whole loaves of bread in two.
Scoop out the inside of the bread, leaving a little at the base.
Pour in the Kerala Mutton Curry and fill till the brim.
Steam up some broccoli and serve with sliced carrots, band of capsicum, sliced cucumber and pickled chillies.