Art Of Listening: The Key To Success

Thoughts About Depression And Suicides 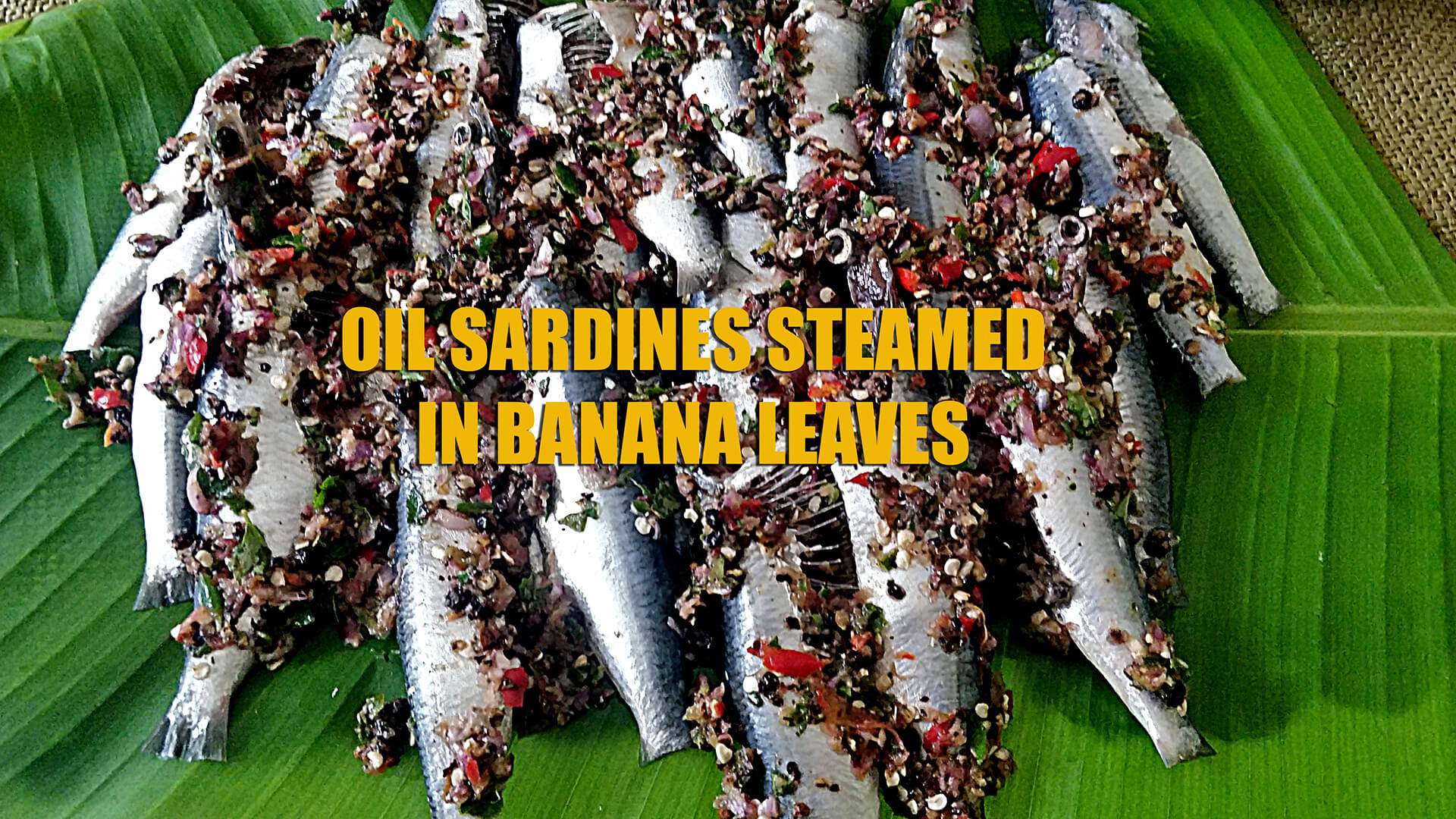 We have to thank thousands of NeiChalas (oil sardines rich in Omega -3) along with the skilled Kerala carpenters for the speed, engineering and design of the tradionalchundanvallams or snake boats that skim over the lake waters in Kerala during the festive Boat races that attract thousands to the lake shore line every year.

When the hue and cry of the Boat races are over, these snake boats of dinosaur proportions are gently eased ashore to rest till the next race the following year.
Each ChundanVallam stretches snake like over 120-140 feet raising its hood behind at over 20 feet from the water surface. Over a 100 oarsmen chant their way through the race with their paddles hitting the water over 90-100 times a minute. Their synchronicity is legendary. Not an oar or chant out of time.

Once the celebrations fade and the glorious snake boat rests in its shed awaiting the next season, another bunch of ChundanVallam heroes get to work.
They apply a mix of the oil from thousands of sardines, eggs and the ash of burnt coconut shells onto the sides of the snake boat.
Like experienced Ayurveda therapists massaging human bodies, the oil concotion is applied Inch by dark inch on the Anjili (Wild Jack) wood in slow time. This slow application like slow fire cooking ensures that the outer frame of these massive chundans stay slick enough to skim over the lake waters the following season and maybe even proudly win the prestigious trophy and the prize money that goes with it.

This year, the Tourism Department of the Government of Kerala came up with the idea of a ‘Champions Boat league’ on the lines of the IPL for cricket. 12 teams to race each other in 12 different lake venues starting with the Nehru Trophy race in mid- August to the grand finale at the President’s Boat race at Kollam on the 23rd of November. Yet to find sponsors, Kerala Tourism has earmarked close to 6 crores for this League.

Meanwhile while the fishing boats come ashore from the Arabian sea, the mainstay catch and people’s favourite still is the oily sardines which are not plentiful as years ago. But when the catch is good, the choicest way to cook up these oily beauties is to cook them in banana leaves, with scales and all. After it is cooked, you can wipe off the scales and lift the flesh off the bones.

I was lucky last weekend to get hold of a kilo of fresh oil sardines from the Hutchins Road fish stall in the neighbourhood. Then decided to cook them up like the fishermen do when they get a bounty of oil sardine catch. 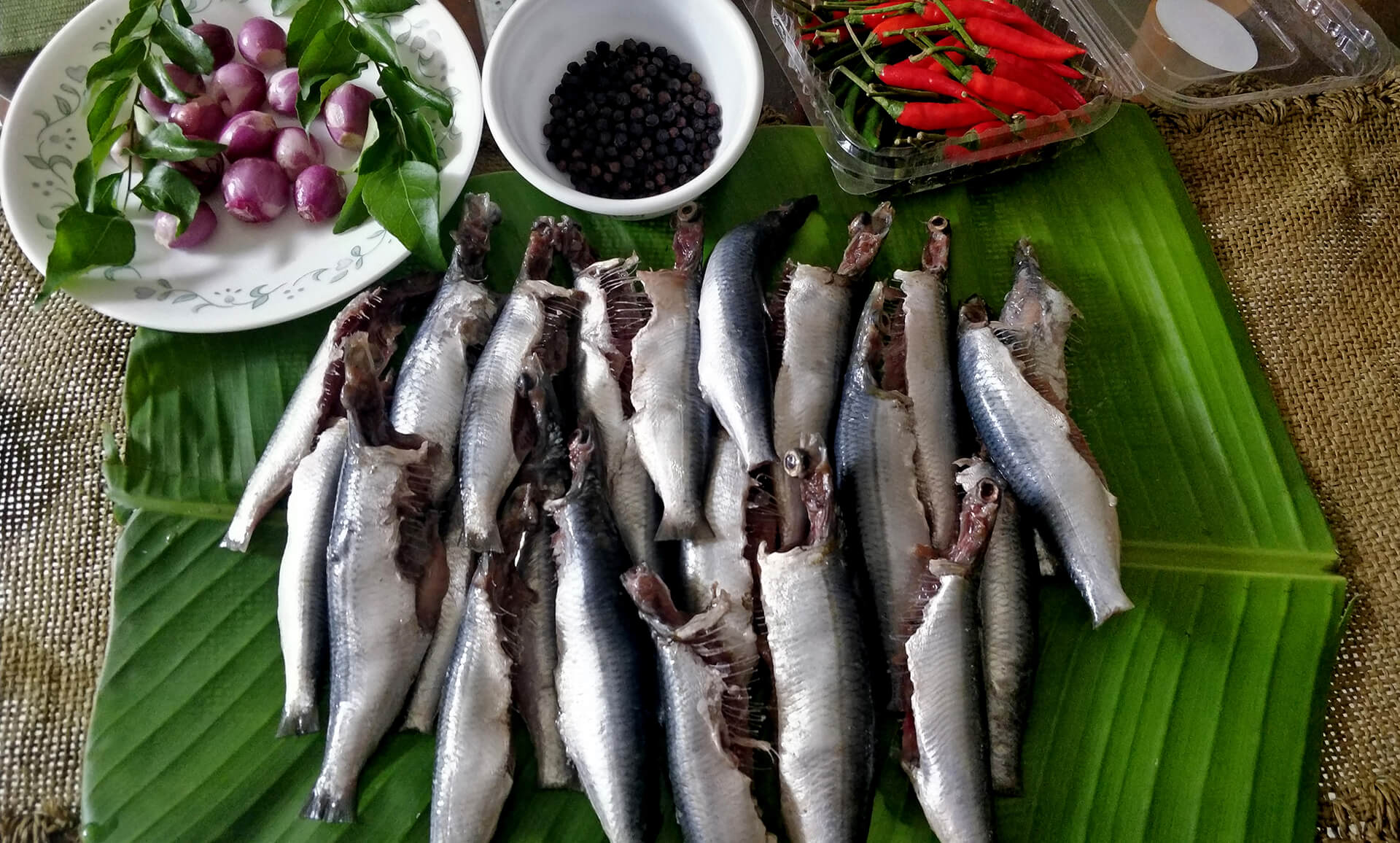 I marinated them with freshly crushed whole black pepper, red and green bird’s eye chilli, small madras onions, curry leaves,tamarind and salt. Left them to marinate for 30 minutes.
Then spread them on a banana leaf in a griddle pan and covered the top with another leaf. And finally a lid to top it all and keep in the steam. After 35 minutes of slow fire cooking without any oil, the sardines were done to perfection. Flesh falling off the sardine bones.
As smooth as ChundanValloms gliding through the lakes after a season of sardine oil massage therapy! 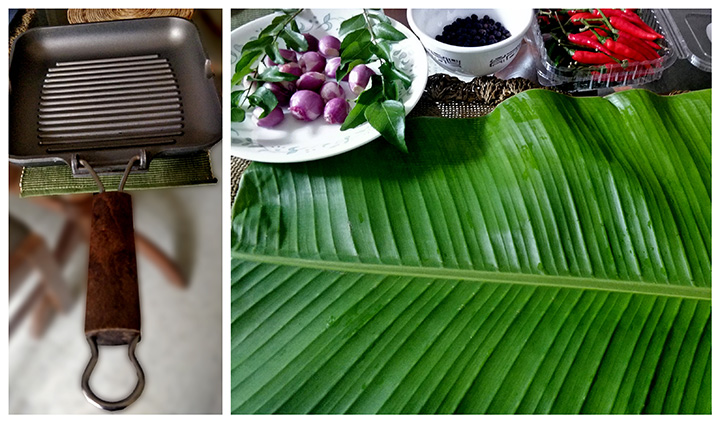 Blend onions, curry leaves, whole peppercorns, bird’s eye chillies, tamarind and salt roughly in a blender.
Apply generously all over the sardines and leave to marinate for 30 minutes. 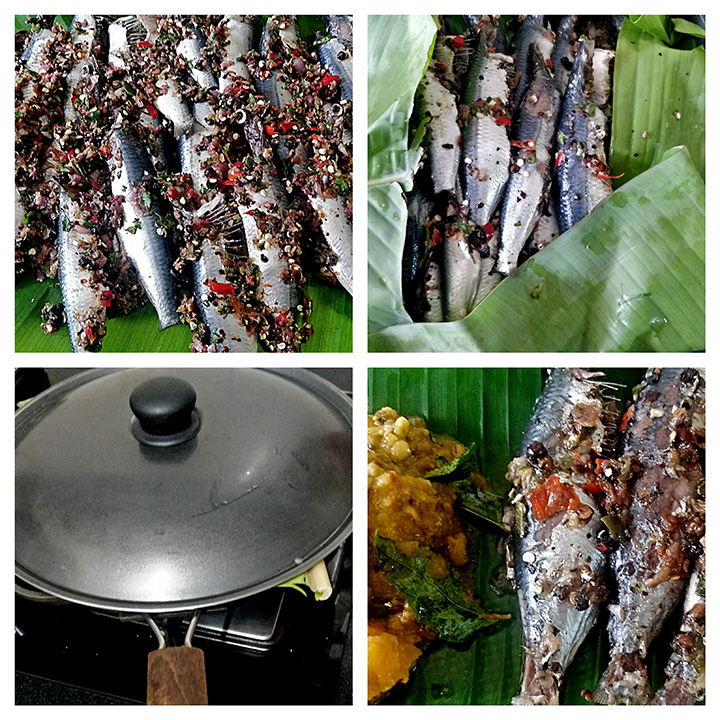 Spread a banana leaf to size over a griddle pan and lay in the marinated oil sardines.
Cover with another banana leaf and close the top of the griddle pan with a lid.
Slow cook for about 35 minutes.
Serve with rice and veggies. Here I have used pumpkin and green gram curry, sauted cabbage and tomato rasam. 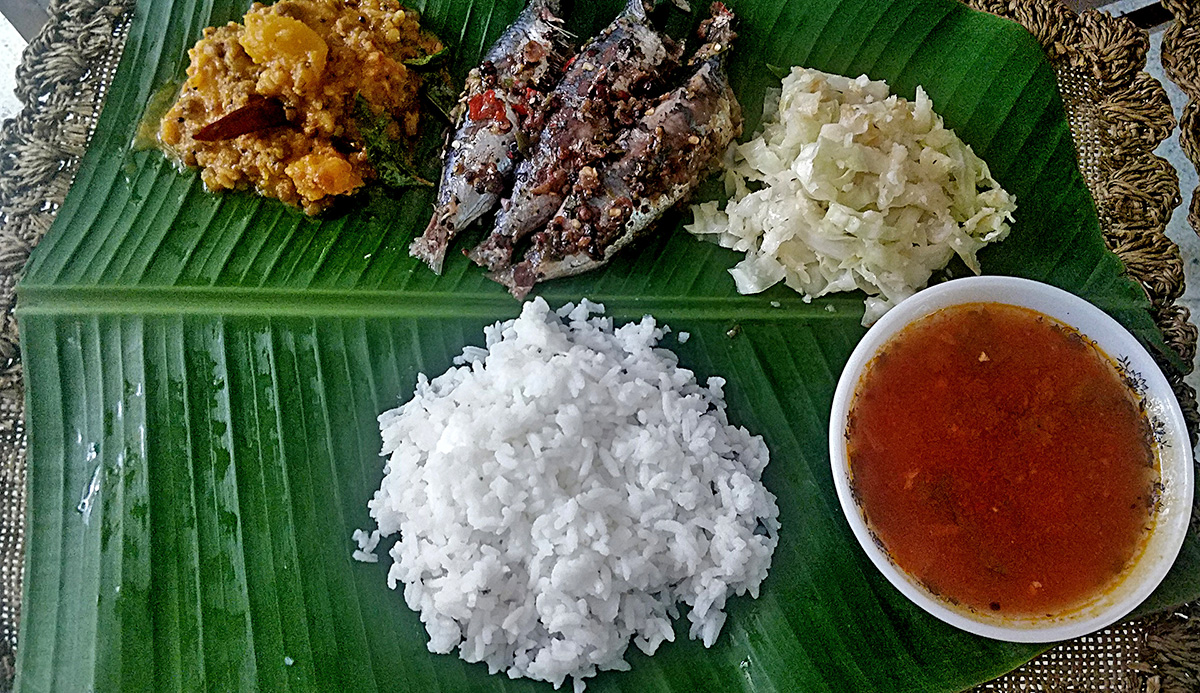