We were Sheep in our school years.
We evolved into animals in our College years. More like pigs.
But pigs on the wing.
Essential listening: PINK FLOYD – ANIMALS

The line had gone viral.
Kollam, Kerala had recorded the highest sale of Royal Enfield Motorcycles’ iconic BULLET brand in the entire country. For me, it was both a ‘WoW moment’ and a statistic hard to swallow. Hard to swallow because back in the seventies, the majority of the youth in Kollam rode bicycles. A Lambretta, Vespa or Vijay Super scooters or the odd Bullet 350, Jawa or Yezdi motorcycles were few and the riders recognizable.

Riding a motorcycle was every bicyclist’s dream.

Even if the cars (Ambassadors, Fiats and Heralds) were few in number, every kid in my school knew the license plates of each car that passed the school by rote. (Blame the schooling then for boys learning blindly by rote). Especially the ones that chauffeured girls to the neighbouring Mount Carmel Convent in Tangasseri!

If nowadays Kollam was known for the largest cache of Bullet motorcycle riders, in the seventies, Kollam was also renowned for having the largest number of foreign cars (in South India) that glided on its traffic free roads.  Even Coimbatore, in spite of all the spinning mill tycoons had lesser numbers and these Kollam four wheeled beauties graced the front porches and garages of millionaire Cashew and Seafood Exporters. High net worth individuals and group companies as we term them now. Us and them. And after all, we’re all just ordinary men. Like the Pink Floyd tune from Dark Side of the moon album. That’s a whole different story. This was about Animals.

But the humble bicycle was our vehicle.

The bicycle was my prized possession right from the moment it was assembled into shape at the Somson’s cycle store, complete with a bell screwed on to the handle bar. The Philips bicycle with its deep green paint on the frame and the chain cover and flashy chrome plated tyre rims and handlebars was destined to become a family member. Right from the day I rode her home through the crowded market streets, maneuvering in slow style, just about avoiding the hand pulled carts, moving trucks, vegetable vendors and evening family shoppers. Then past the famous Shiva temple, the chants playing through loudspeakers till you reach the Thadi Paalam, (‘Wooden Bridge’) where you get off your high horse of a cycle and roll it over the horizontal wooden planks that creaked under the weight. The bridge spanned the canal with sluggish green water and ended in small junction where the infamous gangsters of Kollam called the ‘Pathinetara company’ (18 and a half company, ‘coz the 19th gangster of the troop was short) took a break in the evening. The gang was headed by Raja, who was a butcher in the meat market by day and was the King of the Kollam Market, collecting protection money from all the shopkeepers, hence the name.

Raja wore a crimson red nylon shirt unbuttoned till his belly and a chequered lungi and a large handlebar moustache framing a mouth red with paan stains. That was his outfit on most days. And he rode a Bullet 350.

As he phut phutted around the market and Pallithottam Junction, everyone respectfully gave way.
Raja was a tough dude, but the fishermen were tougher.
No beef with each other though.

I was on a high as I rode into the road that led to my house on my brand new Philips cycle. Not only was the bicycle mine, but Raja and his company of gangsters noticed it too.

Goodbye walks and hello bicyle rides. I lifted the cycle up the stairs and proudly displayed my new possession to my grandmother. She could sense the thrill and from that moment the cycle spent the night in the corridor inside my house. You can’t let a member of the family locked out of the house for the night. Can you?

This was my vehicle to college.
2 unbelieveable years of freedom. The sheep that I was turned into an animal. So did the rest of my school mates. Cycling into the campus without a care.
Slowly my cycle lost its mudguards and chain cover, the chrome on the rim and handles lost its sheen and all I carried to college was a 200 page hardbound notebook casually tucked between the chain and the main frame. Even my ball point pens lost their hard plastic covers. I made do with a refill only, stuck comfortably in the notebook.
No frills, only thrills. I was in the science group with some cool dudes, while the rest of the cooler dudes were in Commerce and Economics. There was war, games, girls, teachers, canteen and recess between periods of classes. And there were strikes when we were let off due to political student strife. Only 75 college working days in a 365 day year. It was like a 2 year long holiday.

I never cared. I only had to reach home in the evening. And lift my bicycle up my home stairs and into the home corridor to keep up her family member role signing off for the day.
As the freedom flowed through my blood stream, the cycle was moved out of the corridor and casually placed against the outside wall of the house. The once shiny, dull green, chrome plated family member now had to spend the night outside.
Stripped almost bare. But ready to carry me to college and back. In college, I met up with so many cool and uncool dudes.
Alex Mathews was one of the cooler dudes from the Commerce stream. Slim and tall with a fire in his eyes. At 16 years of age, we were lost in the quagmire, but the fire of youthful ambitions burned deep inside.

Last week, almost a whole of three decades later, Alex invited me and my mate to his family home in Bengaluru.‘He only cooks for people he handpicks. He is very choosy’ said his wife.
But I noticed his eyes were buzzing even after all the years that we met. He is one of India’s finest financial research analysts, published author, dad and granddad.
Me and my mate happened to be those two just close enough to get him to cook.
Together we were pigs on the wing. And so were his family that memorable night. 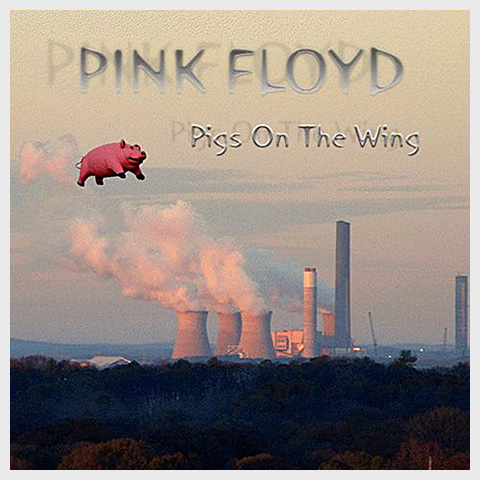 Pink Floyd, the band was the sound of ‘77-79 – The College years of wild abandon. Reverberating like skilled musical prophets of doom who created a unique sound that played like a looped track that never ended, all through our college years. Even today the sound of Floyd still reverbates with the kids who go to college. PINK FLOYD always got their due respect. But back then we were the ANIMALS.
A Pink Floyd album that no one wanted to relate to.
From docile Sheep at school we became pigs on the wing in college.
And then we evolved into dogs later. Sheep, pigs and dogs is all what Pink Floyd’s Animals album is all about. Take a listen.
You’ll understand our college years and the universe around us.

When Alex put the pork chops bought online from the Bangalore Ham Shop ( frozen for 24 hours and marinated overnight by him) onto a well used tava without the Teflon coating, while his barbeque was lit up with a base of charcoal and coconut shells in the balcony just outside his kitchen, it threw me back to college days. Into the marinated pork chops he poured some white wine and laid them on the tava on a high flame. A splash of brandy on either side of the sizzling chops and the high flame 4 minute cooking of each side, the browned pork chops were moved to the charcoal barbeque. Not to cook. Just to be smoked.
The kitchen filled with the aroma of pork and the aura of good friends. Enjoying every moment was his wife, daughter, son-in-law and their son Jake. All of 6 years. The charcoal barbeque was his altar. He was kicked by the flame and the lit charcoal. Jake got the celebratory spirit. And he helped spread it.

Alex then sliced a smoked piece of pork, picked it up with a fork and topped it up with potatoes he had mashed with earlier with butter, a bit of mustard powder mixed in apple cider vinegar and cream. He handed the bounty on a fork to me like at a live Teppanyaki counter. I took a bite and flew back years with the fabulous flavor. The meat close to the fat cooked to brilliant perfection.

We were truly Pink Floyd that night. Even little grandson Jake joined in. He waved us off with after leading the slow walking brigade on his bicycle. We were tickled pink with happiness after a smashing dinner, and like Alex’s delicately marinated pork chops we were flying in slow motion above Electronic City in Bengaluru.
Like pigs on the wing.

Coat the Pork Chops well by mixing all the ingredients well into the meat. Marinate the Chops for about 6 hours.
Heat up a non- Teflon tawa, add a few drops of oil and lay out the marinated chops.
Cook on high flame – 4 minutes each side. Pour a spoonful of brandy on each side while cooking.
Move the cooked pork chops to the barbeque and lay them on for a minute or two to get the smoked flavor in the meat. Brush the sauce onto the meat on either side.
Serve with mashed potatoes.
Tip: For best results, cook on high flame all through.

Mash the boiled potatoes well with the rest of the ingredients to get a good smooth texture and flavor.

Rescuing Your Child From Cyber Bullying

Taj Tirupati Opens Its Doors In The Holy City Of Tirupati

Atlantis Aquaventure Is Set To Become One Of The World’s Biggest...

Yes, You Can Manage Time!

A Nostalgic Thought About Reading And Books