Yet another winter’s day here in Adelaide. The rains return, as if on cue, by mid-day and after few days of mild weather. The weather woman on the TV is spot on with the times when the rain arrives or when the clouds clear and so on. I was wondering what to try today and being another wintry day, I wasn’t too keen on a big lunch, and I had a strange craving for something sweet. So, I decided on making some Panna Cotta. For those who don’t know what Panna cotta it is a very basic pudding that is made of dairy thickened with gelatine. In Italian the name literally means “cooked cream,” since the earliest versions were made of thick cream. It’s very simple to cook and a very light dessert that can be had on any day, regardless of the season!

As usual I was searching for the music I should be playing today. Checked my Spotify for new music suggestions and there was nothing interesting listed. So, I went back to my own play lists to see what I could listen to while I cook. For today my choice was Foy Vance song “Make it rain”… how apt my choice, I chuckled!! Foy Vance is an Irish musician and singer-songwriter who I love to listen quite often.

Now it is time to get started. At least this dish doesn’t need an oven or any complicated steps to cook. It is such a simple dish to prepare and it is ready in few hours in the fridge.

For today’s cooking adventure I used a recipe from Sonal’s Food channel from YouTube. I do follow her recipes. All her recipes are Keto friendly and very simple to cook.

Gelatine, which is made of collagen from the animals, is a key ingredient of this dessert. And I am very conscious about the ingredients I use, so I prefer to use ingredients made from plant based produce. So, when I had this thought to make Panna Cotta few days ago, I searched the supermarket shelves for the vegetarian/vegan alternative for gelatine. My search got me to 2 products, one is “Agar Agar” and the other one is Jel-a-Tin. As I couldn’t find “Agar Agar” at the supermarket, I decided to settle for “Jel-A-Tin”. 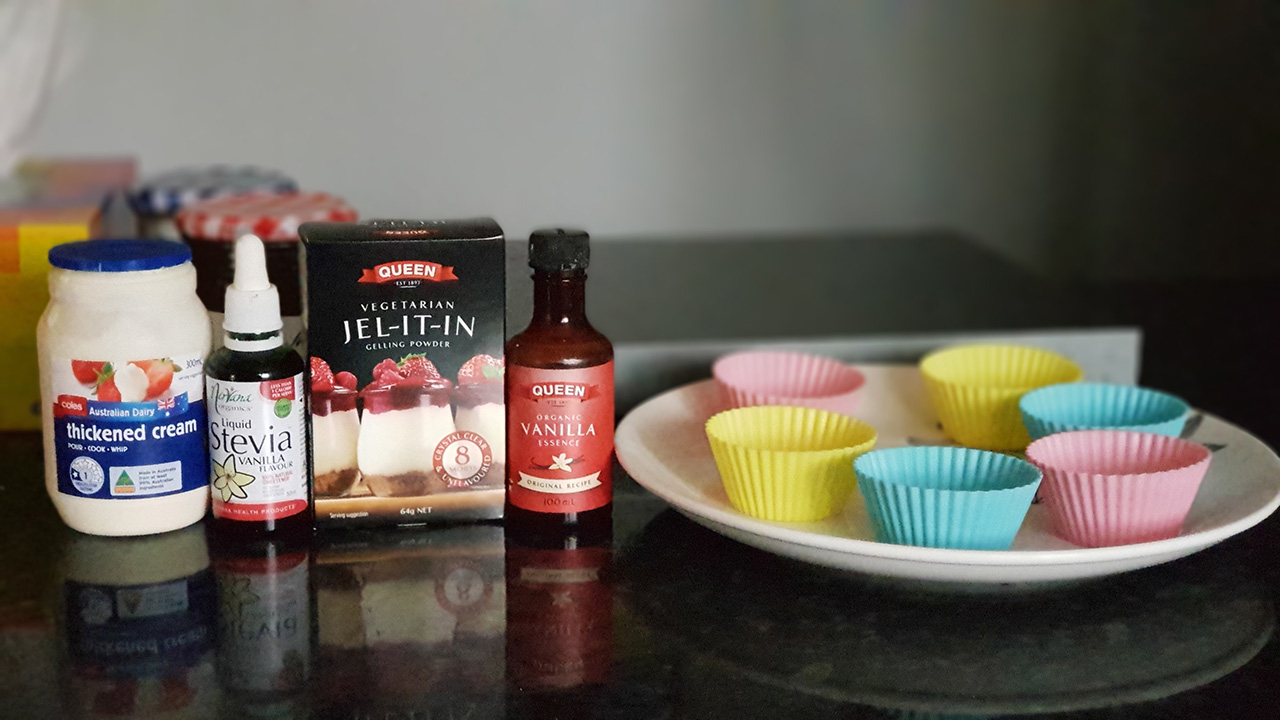 I did make some changes to the original recipe as I didn’t have enough cream in my fridge and was also short of full cream milk (as I don’t use milk at all in my coffee or tea). I prefer using cream in my coffee or pure butter, instead of milk, which is way better tasting than the traditional milky coffee.

To start with I added a sachet of the vegan gelatine to 200ml of cold water and dissolved the entire contents and set aside. Then on another pan I added 250ml of heavy whipping cream (here in Australia it is called thickened cream) and brought it to gently simmer (The cream need not to be boiled, or if you prefer to boil the cream you may do so. It will add to the preparation time as the mixture need to cool down before refrigeration). To the mixture I added 3 to 4 dropper worth of Vanilla flavoured Stevia (sweetener). Stevia has got a distinctive after taste. So, I added 2 tablespoons of granulated Erythritol (sweetener) also. The combination of Stevia and Erythritol works well. Feel free to add more sweetener if you want the Panna Cotta to be sweeter. 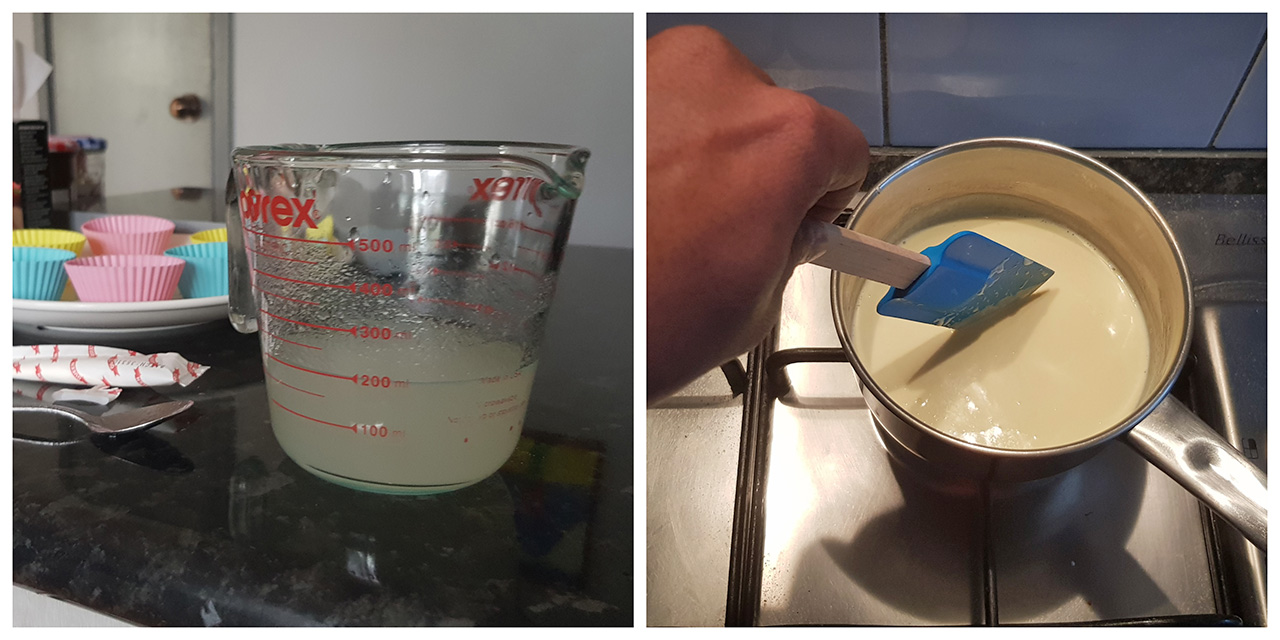 As the cream warms up you can see the bubbles forming at the edges. Remove it from the heat and add a quarter teaspoon vanilla extract and also the vegan gelatine substitute, which was set aside early, to the mixture. Stir the mixture constantly until the all the ingredients are incorporated fully. 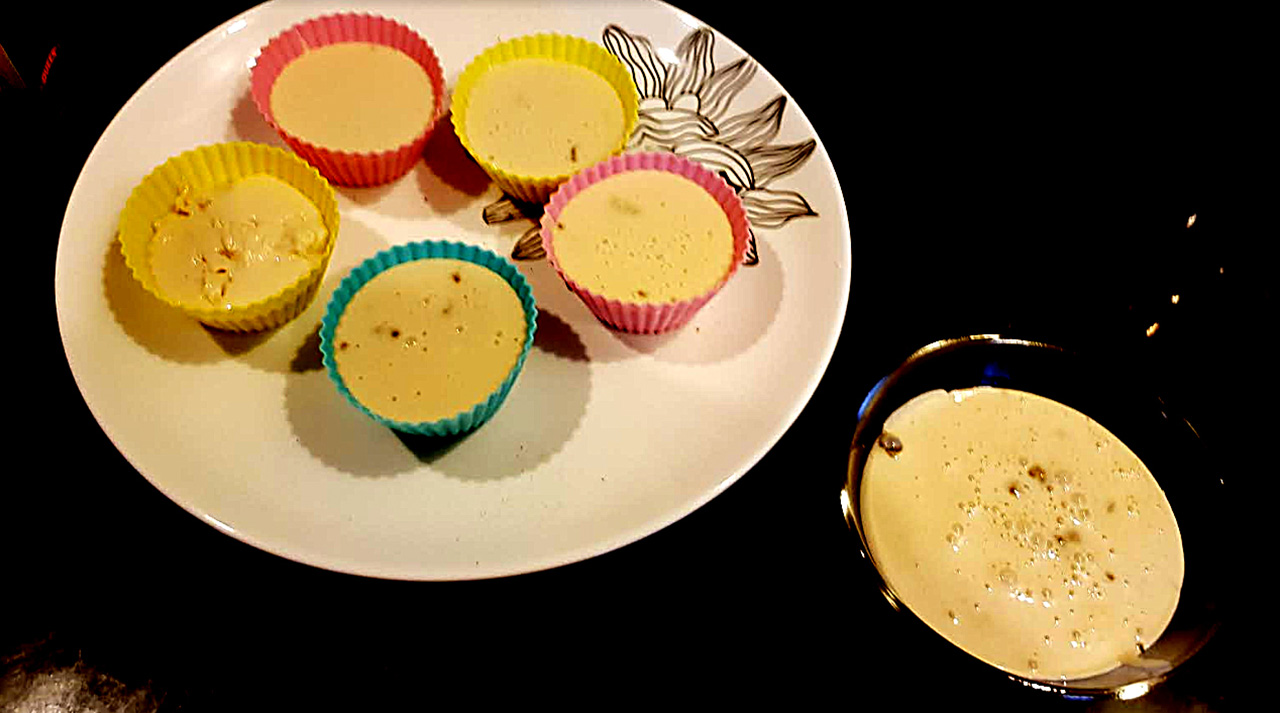 For my variety of Panna Cotta, I dusted the moulds with some instant coffee powder, before I pour the mixture in, so that the coffee flavour masks some of the after taste of Stevia. Usually for keto desserts and ice creams I prefer Xylitol, which is another natural sweetener of my choice, and it works well with the desserts than any other sweetener. It’s just an observation so please don’t quote me on this fact. 🙂 Feel free to use any sweetener that appeals to your palette. Allow the mixture to cool slightly, and then pour them into ramekins or moulds. Refrigerate for an hour to 2 hours until the Panna Cotta is set. Enjoy the dessert by itself or after a nice meal. Am sure this winter dessert will have you satisfy your sweet cravings any day!!! 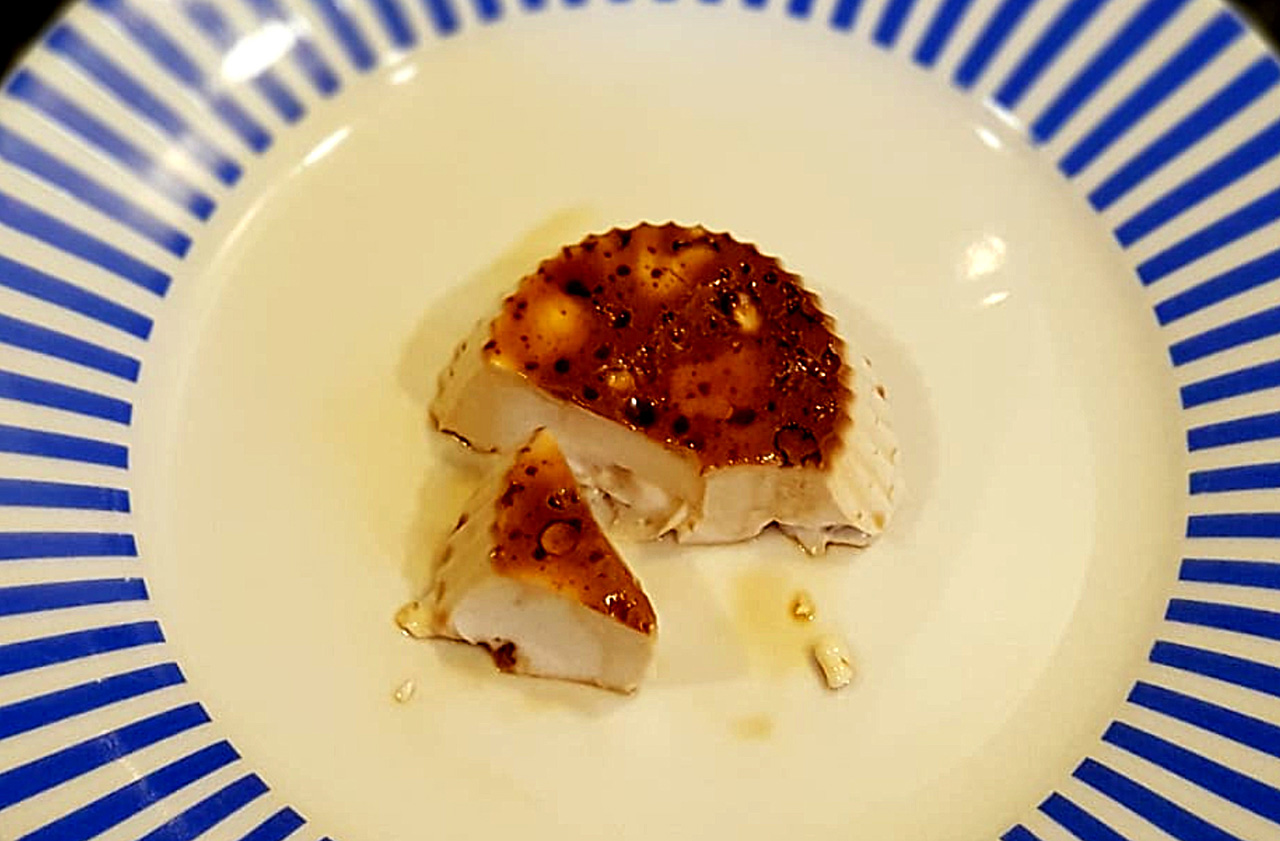 Notes:
Some Panna Cotta recipes says to use 50/50 split of heavy cream and full cream milk. I just used heavy cream only!

I added the entire 200ml of gelatine substitute to the cream, which was 250ml, and as a result the dessert was set in less than an hours’ time. I am sure it wasn’t the right way (maybe I just invented a new method to make instant Panna Cotta 🙂 It is said some inventions are the result of accidents, it could be my turn this time 🙂 . It was more on the firm side than typically wobbly as Panna Cotta should be. It tasted awesome though.

Because I was using Vanilla flavoured Stevia, I used only a quarter teaspoon of vanilla essence for flavouring. Original recipe says to use Vanilla pod and the paste to the cream while cooking. Instead I used the vanilla extract as suggested by Sonal.

Pour the mixture to moulds before it starts setting. A proper Panna Cotta should be wobbly when it is fully set. I will share the original recipe below. Happy cooking folks, until next time!!!

Macros: (The Macros below doesn’t reflect the Panna Cotta I made, as the ingredients were slightly on the reduced quantities)

Preparation time:
20 Minutes, 2 to 4 hours of refrigeration to set. 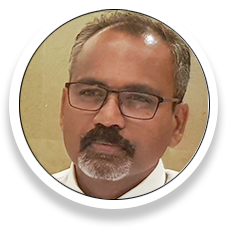 George Samuel is a food entrepreneur, currently working on a low-carb food startup business in Melbourne Australia. He has 30 years of experience as Project Manager in the IT and Telecomm sector. Food is his passion and he has appeared on Victorian Channel 31 delivering cookery shows for Black and White digital media in 2012. He is passionate about clean eating and whole foods and is also a big advocate of sugar free living. His mission is to help people to live a disease-free lifestyle.

Read more from the author:

Muse of the Month-Cassandra Bankson

10 Restaurants With Fires To Cozy Up To In Washington, DC

Melange – An Exhibition of Contemporary Artworks

Does Your Child Participate In Teen Violence?

TEAM TDB
0
For maintaining oral hygiene, today there are a lot of different ideas that have been trending all over the world. One should be aware...

Women- Why Are They Held Back?

The Countdown Begins To Harry Potter: A History Of Magic At...

My Child Is Addicted To The Phone