This year (2020), the graveyard initially built by the Portuguese in Tangasseri, Kollam turns 400 years old.

Back in 1502 on their second sea expedition after Vasco Da Gama’s historic first landing in Calicut, the Portuguese offered higher prices for spices and pepper in Kollam to the Rani of Desinganad than the Chinese and Arabs.

The Rani agreed to their prices and the Portuguese loaded up their ships and the strip of land jutting out into the Arabian Sea from the coastline was leased to the Portuguese.

This 99 acre piece of land was to be known as Tangasseri.

The Portuguese went on to rule Tangasseri for a 150 years.

Followed by the the Dutch and the British.

During our school years in the 1970’s , a challenge thrown at a classmate in the Infant Jesus Boys School compound to take up a fight was straight and simple.

‘Come to the graveyard!’ Those were the key words. The fight was on.

Later in the day, the challenge would end in a brief brawl with a few punches and a clear winner. 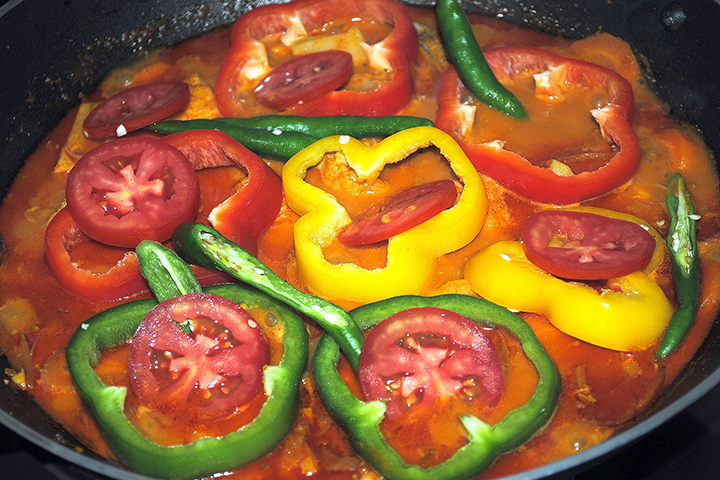 But the location had to be the Portuguese graveyard.

Just as the Portuguese left behind a graveyard and a fort, they left behind a legacy of cooking. Using fish and meats with oil, coconut milk, potatoes and chillies (in fact most of the veggies we use today were introduced to us by them).

And of course the devilish dark pepper that the Portuguese had come here for centuries ago.

Just about the same time the Portuguese occupied Brazil.

It carried amongst others the first Christian Missionaries to India – 8 Franciscan Frairs and 8 Chaplains. Also on board were 20 Portuguese convicts, 4 Hindu hostages (from the Zamorin’s kingdom during Vasco’s last visit for negotiations) a royal Physician and astronomer, new Arab astronomical slaves for navigational experimentation, a returning ambassador of the Sultan of Malindi and the warrior knight Pacheco Pereira.

And this contingent was piloted by the veteran navigator Pedro Escobar – with overall technical command of the naval expedition of 13 ships and 1500 men carrying expensive gifts and diplomatic letters to the rulers of the East.

As the ships reached the South Atlantic, Cabral headed more westward guided by Escobar who navigated Vasco da Gama’a expedition to India earlier. This drift westward ended in Cabral hitting the unknown landmass of Brazil. After a short stint in Brazil, Cabral led his fleet onto India.

The Portuguese discoveries of India and Brazil happened almost in the same period.

No surprise that the Brazilian Sea Food Stew was so much like our Kerala Fish Moilee, though there is combo of fish and veggies unlike us.

Always wondered why we would add veggies to our meat (especially in stews) but never with fish.

That’s taboo in Kerala. Like using yoghurt with seafood, another no no.

Some time ago, I chanced upon an article in the National Geographic Traveller magazine that featured the cuisine of Brazil. The Brazilians relished their fish with lots of coconut milk, chillies, tomatoes and even cashews and peanuts in dishes like Moqueca and Vatapa which are traditional favourites of the state of Bahia.

The Moqueca gets it unique flavour from Palm oil.

The local Brazilian cooking styles were heavily influenced by Portuguese cuisine and these dishes evolved out of that alchemy.

Much so for Kerala cuisine too, as classic meat stews (Ishtew) and the Fish Moilee had a strong Portuguese touch with the abundant use of coconut milk.

So, my version of the Moqueca is a mixed Seafood stew with coconut oil, coconut milk and veggies – Cauliflower, Onions, Tomatoes, Capsicum and green chillies. And coriander, red chilli and turmeric powders for that spicy, desi feel.

Here I have used a kilo of medium sized prawns and half a kilo each of sear fish and squid.

Marinate the seafood with the juice of a lemon, salt and freshly crushed pepper for about an hour.

Saute the chopped ginger and garlic in coconut oil. When done, toss in the onions, cauliflower and carrorts, green chillies and stir fry. 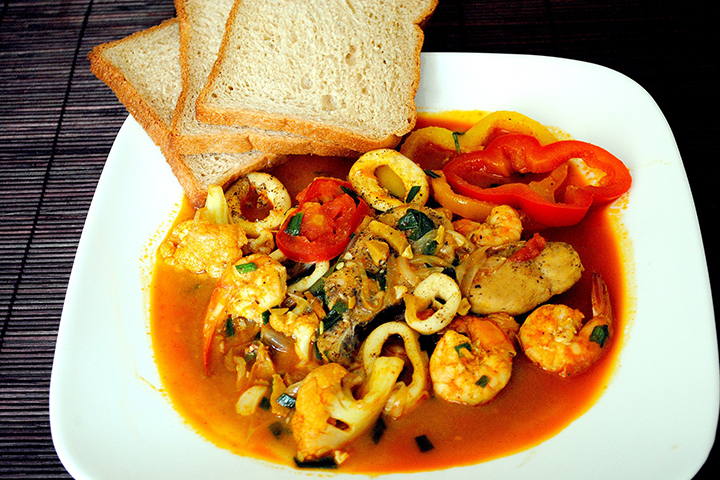 Then add the spice powders – chilli, coriander and turmeric and mix well. Then pour in 2 large cups of fish stock (optional. I made the fish stock with the head and bones of the sear fish.) If you don’t have fish stock, you can add chicken stock too or just plain water.

This spicy, seafood stew with veggies make a great one pot meat and goes well with both bread and steamed rice.

Book Review “The Girl Who Saw It All”

Know It All About Dental Implants

Plus Sized Cocktail Dresses – For All Sorts Of Occasions

Discover Gold at the Goldkammer Museum in Frankfurt

Monu Danesh Surendran
0
The time of writing and the time of publishing an article was never of so much of a consequence to me at all. Until now. In...

Foods To Avoid During Pregnancy

How To Deal With Public Speaking Anxiety

Learn To Ski At The Stunning Locations In St. Moritz, Switzerland

All About Asthma: Causes, Symptoms & Treatment