A biryani originated from the Royal Kitchens of Awadhi cuisines for the Nawabs of Lucknow. History reveals that Lucknow was the capital of Awadh regions. Lucknow the Anglicized spelling of local pronunciationLakhnau. The cuisine of Awadh is known as DASTARKHWAN-E-AWADH. In this method they call it as GALAWATI cooking style. 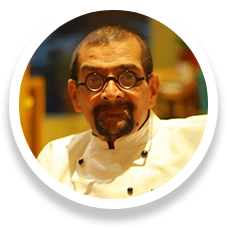 Chef Nandakumar Menon or ‘Chef Nandu as he is known evolved into the Super Chef series. He was at the CASINO HOTEL in Kochi and later at the remarkable COCONUT LAGOON in Kumarakom. Both iconic Hotels and restaurants of repute for the quality and consistency of food offered at their restaurants. Coconut Lagoon where Chef Nandu headed the kitchen moulded him to cater to international clientele from all over the world coming in to experience the magic of the backwaters of Kerala and Kerala itself as a unique destination.

From his early Catering Technology days at Adayar, Chennai and training at the famed TAJ MAHAL INTERCONTINENTAL HOTEL, Mumbai, Chef Nandu was back again at the Welcome Group’s ADAYAR PARK INN, Chennai.

Later he headed the setting up of the various F&B outlets of the ABAD PLAZA group, Kochi as its Corporate Chef.

And then with the Quilon Beach hotels, Chef Nandu created a redefined art of culinary expertise. His clientele were Doctors, Cashew businessmen and of course celebrities from the tinsel world, the cloyed connoisseurs had a different feel with his nouvelle cuisine.

He still loves to cook and share his valuable experience of the world of food with The Daily Brunch and its readers in our series on SUPER CHEFS.
Cheers!

The Perks of Private Dance Lessons

Conquer your fear & Anxiety. Motivation to OWN Your FEAR

Things to keep in mind while you choose the laptop lifestyle

TEAM TDB
0
Starting your own business is often a learn-as-you-go process. But, the more smart decisions you make early on, the better chance your company has...

The Importance of Play in Early Childhood

Kerala Fish Curry Gets a Global Makeover: Thanks to Chef Suresh...