A couple of months back a group of friends who crossed paths at different points in time and life came together during the lockdown, friends who pursue art of words and melodies in their very own and unique ways. Some were our juniors from ISI, some from college, cousins and family, some new friends we met on our way over the last few years of writing books and making films or theatres. Of the 16 of us, some live in the UK, some teach in the US, some work at offices in Singapore or Australia, some of us spread over various cities in India. But we all had internet, and zoom, and so the world was small. Quick plans were planned out, to make collaborative art of sort. It began with tete-a-tetes, went over to open mics, and then culminated into a rather lofty plan of presenting a musical audio play on social media live: Ambitious? You bet! Easy, yup, that too. The people who were on the team were so talented, you have to meet them to believe me. So it began! We argued over possible plots, length and formats, we hunted down people for voice, songs and music.
“Fermata” was born! 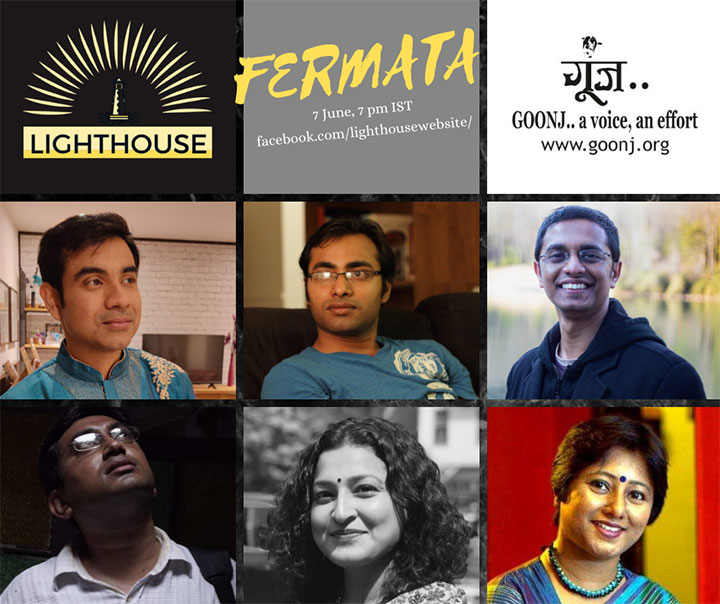 A saga of lost friendships and broken promises, Fermata unfolded the fragility and resilience of people and their long lost bonds in form of letters to each other. It weaves words with music as it tells us stories of heartbreaks and hope, of music and love that stands the ruthless passage of time. It unfolds the reality of current times, and brings us back together in hope and despair alike. Fermata spoke of us and for us, and we could not wait to bring it out to the world.

Fermata spoke of subjects essential to the core of our being, yet understated often times lest we stake our sanity in the process: in that, it became a chronicle of our own lives in some ways. Fermata spoke of childhoods that are disturbed with fear that lurked its shadow over love and innocence, staining hearts and psyches in ways that aren’t easy to fathom until unprocessed emotions come afloat later in life. It spoke of commitment phobia resulting from un-empowered parenting, of running away from the world in failed attempts to run away from oneself, banging against glass walls that are our lives sometimes. It spoke of migration which is both acutely personal yet essentially political all the same, a migration that just isn’t about poor and homeless but spans over the homelessness that is our own heart uprooted from where it always belonged. Fermata brought up issues that are the fault-lines of our society no one talks openly about: how academia is but helpless despair of dry number intellect in face of reality and crises, the ratios of public health in it but has numerators and denominators made of not calculations but lost lives of real people, the mess and the pangs that numbers do not tell stories of. Fermata weaved in it the need to give back so much more than the need to receive, for in it lies the salvation of human kind perhaps. And then Fermata speaks of faith of a better tomorrow even as it knows it may never be!

Such are the times, now…

Time has its own idea of timing, I guess. 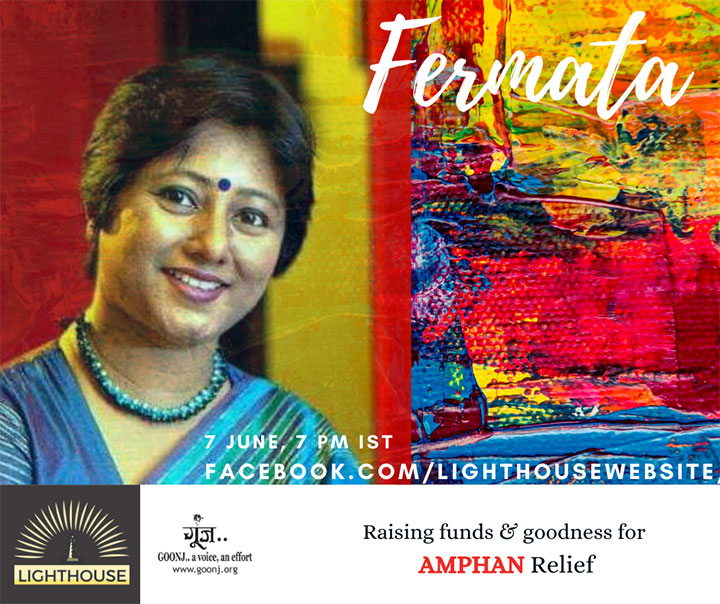 Just around the time we were wrapping up the preparatory steps and planning the execution, we woke up to the news of Amphan that wouldn’t let us sleep for nights thereon. Our hometown was in shambles. Hundred years old banyan trees were wrung out of the grip of earth with the force of the cycle, asbestos roofs flew off leaving homes naked under bare sky. Sunderbans almost melted back from earth into water, it seemed from pictures. Lamp posts and traffic stands dislocated, ceilings gave in, and bloated electrocuted bodies of pedestrians began floating up water logged streets that were once haven to tea-halts and fritter shops for evening tete-a-tetes. Our “boi-para” where we bought second hands of our paltry savings as children, where we took long walks as lovers, the lanes and the earth went under water. Every other house went under gloom of darkness with power supply cut off, with access to clean water becoming fantasies that went dry.

As for us, our first reaction was the usual: we didn’t know what to do than the basic and the obvious, whatever we can, to whoever was known, was working there, needed help. But then it dawned on us to do more. For the time, it had a message for us.
A dream, at its verge of taking shape.

A goodness of human hearts, in demand.
The signs couldn’t be mistaken.
It was too loud to not hear, or act.
So be it, then.

Certain things come with their invisible paths carved out ahead of time, or I can best guess standing now, here, seeing how simply dots join and pieces fall in shape.

“Lighthouse” – dedicated to work on story-telling, change-making and thought-leadership – stepped up to embrace this ahead of its launch in line with its commitment to community building and collaborative art. We made hurried calls to NGOs, we made hurried posters and hurried plans. It is the least we could do, we know. We did that, just that. We met wonderful souls who helped us find the right people at right times, helped us bridge and engage, saw us through. Lighthouse found the best partner it could, which had just the right credibility as well as access to the cause of Amphan relief to appeal to global and local audience at the same time, while serving the regions that are worst hit by the cyclone. The collaboration and the synergy that was formed in the process seemed truly god-sent.

And with that at stake, we took the plunge.

7th June, 7pm saw us, all 16 of us from 12 cities spread over 4 continents – Asia, Austrailia, North America and Europe – gather on zoom mapped to Facebook live from the page of Lighthouse.

We played title-cards, guitars and piano, we sang songs, made music and mouthed verses. We read letters out to each other, of lost hopes and faithful friendship, of despair only time can hold and heal.

We weaved words and tunes, and the audience cheered us on from the other side of the screen – relentless, proud and precious.

LIGHTHOUSE in collaboration with GOONJ, presents

Barely 12 hours into the LIVE act, there were we at 2.5K views and counting.
To realize, these are not just numbers. These are people, this is love.
And oh, the joy of that!

What else can you ask for in return, for the long nights of rehearsal runs, hopes and fretting?

For those of you who want to come share the joy with us, we bring you the FB Live recording of Fermata.

Here is the link for you

Please watch and let us know how you like it. Please feel free to share it in your circles, so more of the world can come share the joy of this collaborative art, perhaps our only reply and hope in face of the trying times that are now.

Lighthouse works with storytellers, change-makers and thought-leaders. Through conversations, collaborations and skill-building, Lighthouse aims to help bring up an ecosystem of deep engagement, empathetic understanding and meaningful equality. Lighthouse works with individuals, students, communities, workplaces, colleges and schools, and involves itself with dialogues around self, community and society that are essential in the ecosystem. Lighthouse offers online and offline courses in written and spoken words for awareness and influence, and lends itself to keynotes and conversations on subjects of motivation, gender conversations and empathy.
Please subscribe to Lighthouse to be part of our future endeavors.

This is but just a small first step. The dreams are many.
Stay with us.
Onwards.

Atlantis, The Palm Gets Into The Halloween Spirit With A Spooktacular...

The Amazing Science Of Pheromones

On top of the World at HIGH Ultra Lounge

Escape The Monsoons With Your Family Over A Long Weekend Getaway...

GUEST BLOGGER
0
Alila Hotels & Resorts provides an array of deals across properties where guests can escape the monsoons and enjoy a relaxing getaway. The charming locations,...

4 Tips for People in Their 30s To Better Manage Their...

The Amazing Science Of Pheromones

Fine Indian dining on top of the Swiss Alps – Kempinski...

All You Need to Know About Dry Eyes Surgery