After 20 years, Budget 2020 has abolished  the Dividend Distribution Tax (DDT) with effect from April 2020. Earlier DDT hit the small and large investor alike as the effective DDT was 16.95 % on the dividend declared by companies to shareholders. Further, individual shareholders were liable for an additional tax at 10 % (plus applicable surcharge and cess) on dividend exceeding Rs 10 lakh. The effective tax rate for individuals falling in the highest tax slabs was thus 14.25% giving investors in higher tax brackets a tax arbitrage of over 30%. No surprise then that this is the investor class that will hurt the most , along with Mutual Fund investors who opted for dividend schemes.

In Budget 2020, DDT in the hands of the company has been abolished and has been simultaneously substituted with a tax in the hands of the shareholders at applicable rates. An additional tax of 10 per cent also has been done away .Thus; the new tax treatment actually increases the tax burden on investors in higher tax brackets, while lowering it for people in low tax brackets. Small tax payers would definitely benefit as their effective rate of tax is much lower and would result in substantial saving. The impact on taxation of large retail investors will be negative, as the effective tax rate for individuals falling in the highest tax slabs is 42.74 % i.e. there will be an additional burden of 28.49%

On the flip side this has been a long standing demand from FII and will promote foreign investment since foreign investors would now claim benefit in their home countries under the double tax treaties.

So what does all of this mean for the aam aadmi ? If you are a small investor and saver , stick with the old tax regime and the dividend scheme options.

For the high tax payer – do the switch  from dividend to growth schemes. The long term capital gains tax, in funds held for longer than a year is 10% (above a tax-free capital gains allowance of ₹1 lakh per year). The short-term capital gains tax is 15%. Hence, investors in higher tax brackets are better off taking their returns as capital gains rather than dividends which will be taxed at the slab rate. The same argument holds good for Debt fund investors. Debt mutual funds face LTCG tax of 20% if held for more than three years. The benefit of indexation is also given to gains in these funds. People in higher tax brackets will find the dividend option highly unfavorable to them compared to the growth option.

Be aware that even a switch between dividend and growth schemes is treated as redemption and can trigger an exit load and a tax liability. 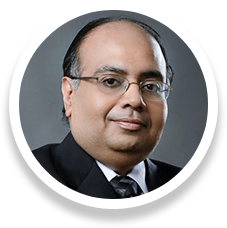 Rajiv Goel – CEO Bombay Capital Services, bum in 1968, in Mumbai, in a family of traditional textile traders studied in a local Convent school named “Campion” and completed his Commerce graduation from H R College Initially, first 5 — 6 years he was a pad of the family business following which he started taking interest in the stock markets which were still in a nascent stage in India.

Even before he completed his graduation, he started his own Sub-Oolong business in the Bombay  Stock Exchange using his street smart knowledge acquired through venous sources He learnt the ground rules of the business in the era of Harshad Mehta and Ketan Parekh.

In 1995, he established  a proprietary  company called “Bombay Capital Services “, a financial advisory firm which advises dents on the fundamentals of small savings. These include sublets like PPF, Gold, Equity, Mutual Funds and similar asset Classes.

Based at New Marine Lines, the company has a ten minute proximity  from the Churchgate and V.T stations making it convenient for the client to access. Over the past 20 years, the company caters to more than 1000 dents including HNI’s, Corporates/ Bank, Retail Investors. The company has a dedicated team and research desk which advises clients on Equities Commodities, Forex, Mutual Funds and Insurance. Presently, it has an office in Mumbai and Delhi and plan to open up branches shortly in Kolkatta and Chennai.

Be The Person You Want to BE. Smash the Victim Mindset.

Don’t judge your kids: A mom shares her parenting wisdom

GUEST BLOGGER
0
June 25, 2018 – Mandarin Oriental, Hong Kong celebrates the natural side of the city with four curated outdoor excursions for guests to explore the territory’s...

Can India be Safe for its Women?

Get rid of Slipped disc with Endoscopic Surgery

NYC & Company Invites Visitors To Discover Queens While Attending Us...

Social Connections: An Ideal Prescription for Holistic Health, and Longevity