Tightrope walker, Freddy Nock has done it again! The acrobat who already has 22 world records for acrobatics to his name has now added three more. On June 23rd, 2020 Freddy showcased three extraordinary performances at the Glacier 3000 Air Show presented by Show-On in Switzerland and surprised himself by adding 3 new records for balancing acrobatics in The Guinness Book of World Records to his amazing long list of achievements.

Freddy walked in three sections on the Gondola cables. He first tight-walked a distance of 40 meters on the steepest section of the Col du Pillon cable car in his favourite style, with his balance bar and no security, on a slope of 39.1° at its peak. This is the steepest incline ever walked on a tightrope, surpassing his own record set in China in 2015, registered at 38.06°.

For the second section of the cable that links Cabane (2500m) to Scex Rouge (3000m), Freddy set off on a bicycle for 367 meters, breaking his own previous record of 72.5 meters, this time at a height of 175.4 meters! For the last section Freddy walked blindfolded on the cable for 151.1 meters, which has never been attempted before. The acrobat surpassed himself in these performances on the Air Show. 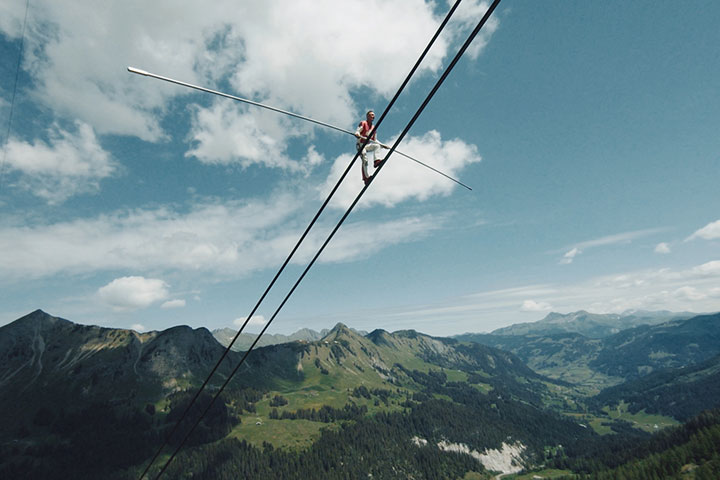 Another fabulous highlight of the show were acrobat artists Sheila Nicolodi, Ramon Kathriner, and David Maillard who also participated in the Air Show and performed at unprecedented heights and altitudes, to honour artists around the world who are unable to practice during this global health crisis

Artist Ramon Kathriner, opened the show with his famous Wheel of Death act, lasting almost 5 minutes at the altitude of 2500 meters. Followed by French speaking Swiss, David Maillard, who literally threw himself under the gondola, facing the 200 meters below him, solely attached by his arms firmly clinging to his aerial straps. Later in the day Sheila Nicolodi achieved the highest performance of her career, twirling around the pole dance bar, set up for this occasion opposite the Peak Walk by Tissot at a 3000 meters altitude.

Sheila’s act was accompanied by music from the top of the Botta restaurant Glacier des Diablerets, where the ephemeral trio, Ramon Kathriner at the piano, DJ Michel Cleis, and Jazzman and actor Troy Anderson, were playing in a impressive formation, the piano facing an breath-taking void. Director of Glacier 3000, Bernhard Tschannen is still amazed by what just happened before his eyes: “We are happy to have been able to make our facilities available for a noble cause, during a period that has also severely impacted us. What these professionals have just achieved is simply indescribable”.

More information on attractions on Glacier 3000

TRAVEL FOR INDIA – An Initiative by IHCL on World Tourism Day

IHCL expands presence in Uttar Pradesh with the signing of a...

Self – Doubt and Self – Talk

Role of Yoga in development of Kids

TEAM TDB
0
Celebrating his Architectural Influences in Chennai and Colombo Mumbai, July 2019: Taj commemorates the centenary of Sri Lanka’s leading architect, with a journey through Geoffrey...

IHCL Announces The Addition Of 8 Bungalows To Its Ama Stays...

LitPick Review Of Memoirs Of A Play-White

Does IVF treatment during summers have better outcome?

Out of this world! The KAPPA CHAKKA KANDHARI experience in Bengaluru.