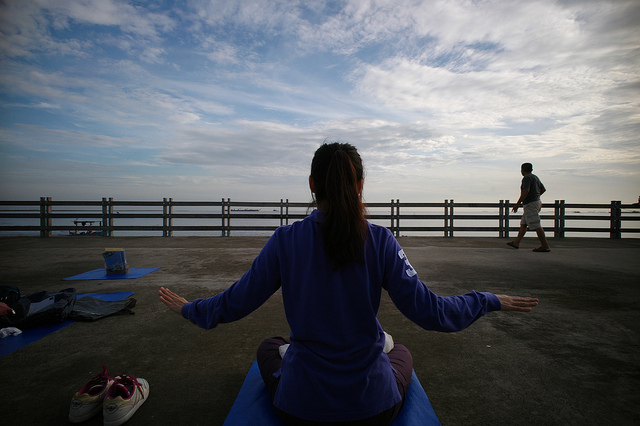 An Amazing Meditation for Boosting Your Brain and Healing your mind: Tips and Techniques

After one of my training classes for students, a lady came to meet me with her son. The training session was for improving the study skills and memory power of students. The students were learning a number of psychological and yogic techniques to boost their brain and improve their studies and sharpen memory skills. Some of the parents were also present as observers. Impressed by the session, that lady wanted a special advice for the problem of her son, Rathish. He was a plus two student who had been a consistent performer in the school. But recently his performance has dwindled since he is not able to concentrate in his studies. He cannot remember what he reads. The things learned cannot be retained in his brain.He is worried and depressed. He is too much anxious about the examinations and due to his high anxiety levels he is unable to score even pass marks for some subjects. His parents tried their best to encourage him and gave him some memory tonics, but of no use.

I talked to Rathish personally and was trying to fathom his mental agony. I understood that he was extremely anxious and worried about his problem. I advised him to practice Kirtan Kirya meditation which also was taught in the training session. He agreed to practice it two times daily, in the morning and evening.

After a week, Rathish contacted me over phone and expressed his joy and satisfaction for the wonderful improvement he experienced. Now he is able to concentrate on his studies and to remember and retain what he learns. The sharpness of his intellect has made a comeback! I advised him to continue the regular practice of Kirtan Kriya at least once a day.

When I met him after two months, he was a totally different person,very confident and happy. He could score good marks in the exams and he has become the topper in the class.

Kirtan Kriya is a mediation practice originated from Kundalini yoga. It is a practice of chanting mantras and performing mudras or finger poses simultaneously. The mantras are ancient sounds, originated from the old mantra ‘SATNAM’, meaning ‘my real essence’. The sounds used as mantras are Sa, Ta, Na, Ma. While chanting Sa, Ta, Na, Ma, you change mudras or finger poses, with each sound and the process is repeated for 12 minutes. It has been proved that this is a very powerful meditation to boost your brain and heal your mind.

The Alzheimer’s Research and prevention Foundation in U.S. conducted extensive researches to find out the effect of Kirtan Kriya on one’s brain and mind. Dr. Dharma Singh Khalsa, the director of the foundation, has published the findings. The study showed that a 12 minutes Kundalini yoga meditation called kirtan kriya improved the brain functioning by increasing cerebral blood flow, enhancing connectivity, improving memory, and reducing stress and anxiety. Also the level of the enzyme, ‘telomerase’, which prevents the aging process of the brain cells, was increased after meditation. This helped to prevent Alzheimer’s disease and to eliminate anxiety, fear, depression, and mental stress. The brain’s activity in the regions related to the ability for focusing and multitasking increased after this mediation. Significant improvement in mood and verbal memory performance were also noticed in the practitioners.

A Pennsylvania university study was published in the ‘Journal of Alzheimer’s Disease’ in 2010. The UCLA University of California also published a research report about the effect of Kirtan Kriya practice on the brain, in the Journal of Nuclear Medicine in the same year. Both these studies confirmed the wonderful effects of Kirtan kirya to boost the brain cells and improve the brain functions.

The Canadian Alzheimer’s Society has started recommending the practice of Kirtan Kriya for preventing or slowing down the effects of Alzheimer’s disease. It was yogi Bhajan who spread the knowledge of this meditation in the U.S. and other foreign countries.

When you chant Sa, Ta, Na, Ma, the tip of your tongue touches and stimulates the acupressure points on the roof of the mouth, sending a signal to the hypothalamus, pituitary gland and other areas of the brain. It is estimated that 84 acupressure points in the mouth, connected to different parts of the brain are stimulated by chanting Sa, Ta, Na, Ma. The stimulated brain parts include the superior frontal gyrus, which is significant for improving attention, concentration & focus and anterior cingulate cortex involved in decision making and emotional regulation.

The finger movements or mudras done simultaneously along with the chanting of Sa, Ta, Na, Ma activate the motor and sensory areas on the anterior cingulate which is important for the balance within the autonomous nervous system. In short, the practice of Kirtan Kriya can bring highly, powerful positive effects on the brain function and create balance of mind.

The different mudras done with finger movements can help you to balance the vital five elements of your body since each finger represents each of the elements as shown below.

The imbalance, if any, of these five elements in your body will be corrected naturally by these mudras ensuring perfect health.

When you do Kirtan Kriya Meditation your old memories, experiences, feelings and emotions may arise in your mind. This is a good indication that the feelings and emotions hidden deep in your unconscious mind are released and your mind is undergoing a cleansing process just as in a psychotherapy session.  You can witness this process as a third person without getting attached to it or becoming emotional.

How to do Kirtan Kriya?

Kirtan kriya can be done for different durations, like 30 minutes, 12 minutes and six minutes. But 12 minutes version is the most popular. So this version is explained below.

Select a convenient and comfortable place, free of dust, noise and other disturbances. You can sit cross legged on the floor mat or seat yourself on a chair with your spine straight, resting your palms on your knees facing upward. Keep your eyes closed. Take a deep breath through your nostrils and exhale through your mouth with a sound. Repeat this inhalation and exhalation two or three times.

Start the chanting, of the sounds Sa, Ta, Na, Ma with lengthened ending as Saaaah.

Middle finger tip to the tip of the thumb as you chant Ta.

Small finger tip to the tip of the thump as you chant Ma.

The chanting must be done along with the finger movements as indicated above in the following sequence.

In whisper for 2 minutes

In silence for 4 minutes

In whisper for 2 minutes

At the end, exhale and inhale deeply and raise your both hands above your head, sideways. Then shake your hands and fingers vigorously. This will help to enthuse and raise your physical energy.

When you do this meditation as a daily routine, it is preferable to practice at the same time and same place every day. This is a very easy from of meditation most suitable for busy people.

Benefits of the meditation

-quality and clarity of thinking and activate other brain functions.

Kirtan kriya is kundalini yoga’s highest mantra meditation using the science of chakras. It exploits the power of mantras, mudras and naad yoga simultaneously to work its magic. This meditation is highly powerful since it uses the most important mantras from yogic science, the Sa, Ta. Na, Ma .It stimulates the pineal and pituitary glands, associated with crown chakra and ajna chakra. Regular practice of this meditation as elaborated can bring about total mental balance to the individual psyche . It really helps to bring about the abundant Ganges of cosmic energy into our mind’s coffers. A healthy mind is no doubt the paramount secret of our life’s success. Kirtan kriya meditation brings about fantastic equilibrium to the mind. It is self healing,rejuvenating and revitalizing. The technique is an immense boom to the student community, especially in today’s competitive world. This amazing yoga meditation needs to be promulgated worldwide with greater enthusiasm.

‘If you can do only one meditation, this is it. It does everything for you in the order that you need. It is your teacher’. This advice of Yogi Bhajan reveals the magical powers of this meditation.

Dr. JOHN MUZHUTHETTU is a Human Resource Consultant, National Trainer and Counselor. Formerly he was the Deputy Chief Engineer, Kerala State Electricity Board and is still working as an external faculty of HRD Programmes of KSEB. He is also a faculty of Department of Management Studies, Mar Augusthinose College, Ramapuram, under M.G.University, Kerala. He is the PG course co-ordinator of MHRM.

He is columnist in several Magazines, like ‘Business Deepika’, ‘Creative Business’, ‘Donbosco’ etc. His articles have been published in many magazines and journals. His several speeches have been aired by All India Radio. His interviews on various subjects have been  telecasted by Power Vision TV . He is the author of five best-selling books:

As a trainer, he has conducted more than thousand  seminars and workshops for teachers, parents, students, executives and others, on several subjects like Stress Management, Time Management, Personality Development, Emotional Intelligence and Spiritual intelligence for Excellence, Communicative Skills, Assertiveness, Motivation, Study Skills, Effective Parenting, Counselling Skills etc. He is an external training faculty of Power Engineers Training and Research Centre of KSEB. He is  an external faculty of IMG Cochin. He is also the Secretary of Upasana Cultural Centre, Thodupuzha.

Image Credits: Seika via Flickr.com under the Creative Commons Licence

Wellness In The Mountains At Emirates One & only Wolgan...

10 Essential Habits For A Healthy Lifestyle

Travel Though Time At The Digital Revolution Exhibition In Frankfurt

Things To Know Before Starting Your Own Business

TDB CAREER DESK
2
Starting a business is always exhilarating and frightening at the same time. There is never a sure shot answer to ace it. The vulnerability...

In Pursuit of Emotional Health

Hakkasan Brings its Award Winning Cuisine to Atlantis, The Palm

Everything You Want to Know About Modern Kitchen Splashbacks