Great Lessons of Public Speaking From the Greatest Orators of History 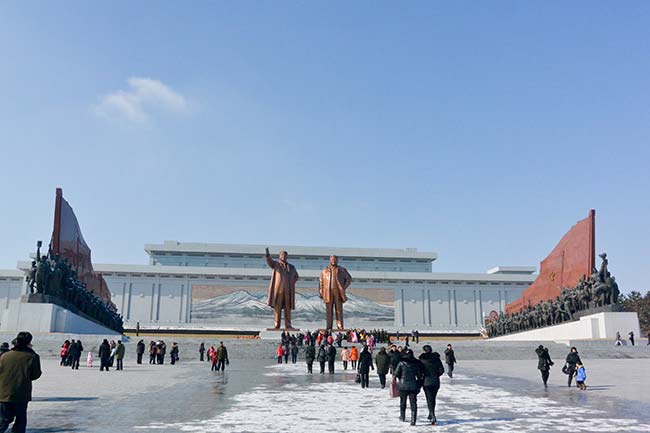 With sabres rattling on the Korean Peninsular Andrew MacLeod travels to find that the battle is between governments and not people! Andrew Macleod is a former senior official of both the United Nations and the International Committee of the Red Cross and past CEO of the Committee for Melbourne.

“President Kim has said it is now time to deal with the ‘American problem’ once and for all. He claims he now has the capacity to not only attack the United States, but he claims the capacity to win.

Tension on the Korean Peninsular have come to the point where a truly horrific war could take place.

Many are looking for the real motivations. Almost certainly there are other agendas at play. Complicated issues of foreign policy rarely have simple solutions. However, more frighteningly, perhaps Kim believes what he is saying. The world is far more dangerous if North Korean officials believe they can win.

On my recent visit to North Korea I saw two things: Firstly, the degree of self-delusion is all pervasive such that an inflated self-belief is real. Secondly, of war comes to pass, it is normal people that will suffer, and normal North Koreans are not too different from all of us.

But how could self-delusion reach such a grand scale that North Korean officials or people could believe they could successfully take on the United States?

North Koreans have been brought up on a diet of propaganda extolling the semi divine nature of the three president Kims. Both Kim Il-sung and Kim Jong-il lie in state in the former office of DPRK’s founder Kim Il-sung.

‘Office’ is a term to be used loosely. Palace, bastion, fortress or grand demonstration of the inequality of a dictatorship, might be a better description.

While the country starved through famines, the Kims lived in acres of marble, lit by millions of dollars’ worth of chandeliers. The rich irony is that the masses are now permitted to queue up and enter this grand palace to pay sobbing respects to the two leader’s embalmed bodies. The masses feel grateful to be allowed in to the previously forbidden building and somehow don’t get angry at the juxtaposition of the living environments. On questioning our guides, they didn’t seem to even see the juxtaposition, let alone feel angry about it.

All of the marble and chandeliers could somehow be anticipated. I did not anticipate the gentle sobbing of people who looked upon their departed leaders. Was the sobbing and emotion real? Undoubtedly, in my view, yes.

Having lived in Yugoslavia under Milosevic and spoken with Islamic extremists in Pakistan, I have come to accept, although I may not agree with them, that people who receive only one source of information, believe that single source of information. Humans, when lacking competing information, tend to accept what they are told by those in authority – particularly if they have been through an education system that does not teach independent thought.

North Koreans have but one source of information from cradle to grave – and that source is the State. The State tells them their leaders are semi-divine. They have even reset the calendar. The year is the year 103 AK. It is 103 years since the first Kim’s birth.

The State tells the people that the government of the DPRK, in the interests of everyone’s health, encourages people to walk or cycle, and hence the lack of cars. Even at night. Even below zero. This was an early reminder of mass indoctrination. Hence why there are few cars.

The State says that in a war against America, North Korea would win.

Normal people believe what the State says because they have no alternative source of information. No internet, not international media, few tourists coming to whisper quiet words in North Korean ears.

If you had been brought up such a diet, believing the rituals of the semi divine, sobbing in the presence of their bodies, you might believe North Korea could win too.

Religion is a better analogy for the Kims than politics. The personality cult and propaganda around the Kims is more like a religion than mere political control. Many believe in the words of Abraham, other Mohammed (PBUH) and others Jesus Christ. Not all three can be right. Believe is subjective.

The west would be foolish to make policy assuming that the North Koreans do not believe in their own strength. Some senior people may know the truth, but most will believe the propaganda and perception is reality when it comes to motivating populations – even when the population is full of people have simple and normal hopes and desires similar to ours.

One of my guides, a 28-year-old, intelligent young woman, clearly loved the country and her people. She wondered who she would marry, how many children she would have and what the future would hold for those children. She was no different from most 28-year-old single females anywhere in the world.

If countries go to war, it is people like her who would suffer.

I would have liked to have stayed in touch with her and seen what the future brought her and perhaps the family she wanted to have. This question of how to stay in touch demonstrates that divide the politics and leadership places between us as people.

I rely on email and social networks. But there is no internet in North Korea. There is no option for a North Korean to stay in touch by electronic means.

So here we have it, two potential friends reaching across political and cultural divides, separated by politics and possible conflict with no way of being able to stay in touch.

So when reading about the nuclear tests I would say this: the regime that runs North Korea is evil and megalomaniacal. But the people are normal. They are like us. They want the best for their children, but they have been indoctrinated.

We may disagree with the leaders, but let’s also remember the people, and how hard it is for us to stay in touch with people who are just normal souls, like us.”

Andrew MacLeod is a recognised global leader, negotiator and communicator in the business, diplomatic and humanitarian field. He has a track record of leading organisations through challenge, crisis and change.

At Cornerstone Capital MacLeod is part of the founding board and as a Non-Executive Director has been part of the team overseeing growth from start-up to ten figure (in US dollars) funds under advice and management in only 2 ½ years. While CEO of Committee for Melbourne, Professor MacLeod reversed three years of growing deficit to restore the organisation to financial sustainability. While Interim CEO of Good Super he re-established positive, working relationships with corporate regulators after the institution suffered ‘regulatory challenges’. Other positions have included GM Community Communications and external Relations for Rio Tinto where he successfully negotiated stakeholder arrangements for major infrastructure investment in Mongolia. MacLeod maintains several senior corporate and charity advisory roles including Critical Resource UK, Gane Energy Australia, Backpack Beds USA and Beechwood International.

His negations successes include time as Chief of Operations of the UN Emergency Coordination Centre in Pakistan, where MacLeod negotiated a complex series of relationships that saw the Pakistan military, international NGOs, UN agencies, US military, UK military and non state militant groups all playing a role in delivering a successful operation without casualties or conflict. The costly intervention kept 3.5 million people alive during a six-month Himalayan winter whilst staying under the $600 million plus budget. The innovative model of ‘Non Interfering Coordination’ has been documented in both The Pulse of Humanitarian Action (Fordham Press) and The Liaison Volume IV Issue 1, Centre for Excellence in Disaster Management.

MacLeod’s foundation training was as a lawyer (admitted to practice in Australia and the United Kingdom) and Army Officer (Australian Infantry). His specialisations included International Shipping, War Crimes, Crimes Against Humanity and Genocide. For the International Committee of the Red Cross MacLeod set up and ran Law of Armed Conflict training with military units in Rwanda and former Yugoslavia during the 1990’s that saw a measurable decrease in civilian casualties.

Recognising his systematic thinking Professor MacLeod has now been appointed a Visiting Professor at Kings College London, an Affiliate Senior Associate to the Center for Strategic International Studies in Washington DC, recognised in Australia as a Vice Chancellor’s Distinguished Fellow at Deakin University, a visiting Senior Lecturer to University of Tasmania Law School and was awarded the University of Tasmania Foundation’s prestigious Graduate Award. MacLeod served on the Advisory Boards of the World Economic Forum’s Future of Civil Society Project Advisory Board, Kings College Humanitarian Futures Project and the UN Expert Group on Responsible Business and Investment in High-Risk Areas.

Author and communicator
MacLeod is a strong communicator having appeared as an expert on television and radio programs. He has been published in journals and newspapers internationally on areas of corporate reform and profitability, stakeholder management, leadership, negotiations, global affairs, security and terrorism. He is the Author of the book A Life Half Lived (New Holland Press). He is a sought after corporate speaker internationally.

Sport
MacLeod was also a world-class swimmer having won a silver medal for the 200 meters Butterfly at the 2002 World Masters Games. He regularly volunteered to help national swimming teams in the developing countries.