March 5, 2020 – Spring in NYC bursts with beauty, from the blooms at Macy’s Flower Show and Brooklyn’s cherry blossom festival to the fun fashions of the Easter Parade. There’s also beautiful art and exhibitions: an early work by Jackson Pollock at the Guggenheim. For details on these and many other happenings, read on.

Each year on Easter, celebrants don festive finery and show off their very best bonnets along Fifth Avenue. Immortalized by Irving Berlin (with some help from Judy Garland and Fred Astaire), the pageant is a New York City tradition that stretches back to the 1870s. Starting at about 10am and continuing until 4pm, the parade marches north on Fifth Avenue, from 49th Street to 57th Street. The best place to watch is from the area around St. Patrick’s Cathedral; better yet, bring your bonnet and join the parade.

Co-curated by the Film Society of Lincoln Center and the Museum of Modern Art, this yearly festival celebrates the most innovative voices in filmmaking from a broad range of international filmmakers at the start of their careers. Now in its 49th year, the festival has helped ignite countless careers, including those of Pedro Almodóvar, Spike Lee, Steven Spielberg, Darren Aronofsky and Wong Kar-wai. Explore new works by the next generation of auteurs, with screenings at MoMA and Lincoln Center. Check back for details about this year’s installment. 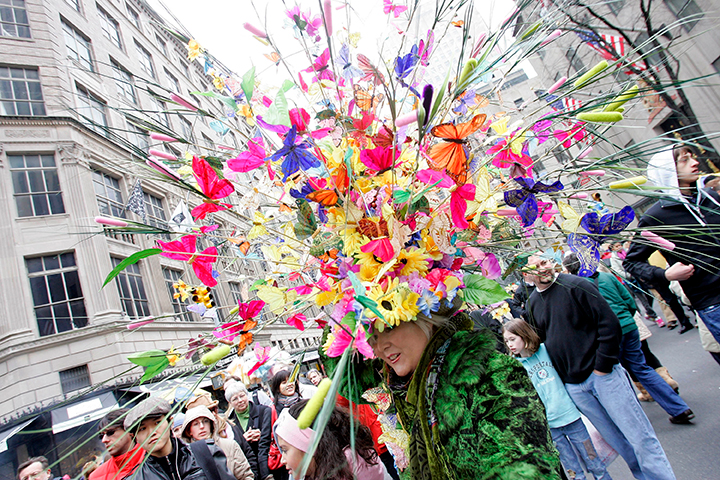 For two weeks, the clothing and accessories won’t be the only colorful items on display at Macy’s. During its annual flower show, the iconic department store hosts beautifully bright floral arrangements, live music, kids’ activities and seminars. This year’s show—”Voyage to Oceanum”—features an under-the-ocean odyssey of vibrantly colored deep-sea florals and aquatic life

Cherry-blossom viewing, known as hanami, is a centuries-old Japanese custom, a springtime occasion for merriment and the contemplation of life’s beauty and transience. You can partake in this tradition at the Brooklyn Botanic Garden, home to scores of flowering varieties for public enjoyment. Guided tours focusing on the blooms are held on Wednesdays during the April viewing season, though the more-frequent garden tours touch on them as well. The month culminates in a celebration of the brilliant blooms with Sakura Matsuri (April 25–26), a festival of Japanese performances and cultural happenings. 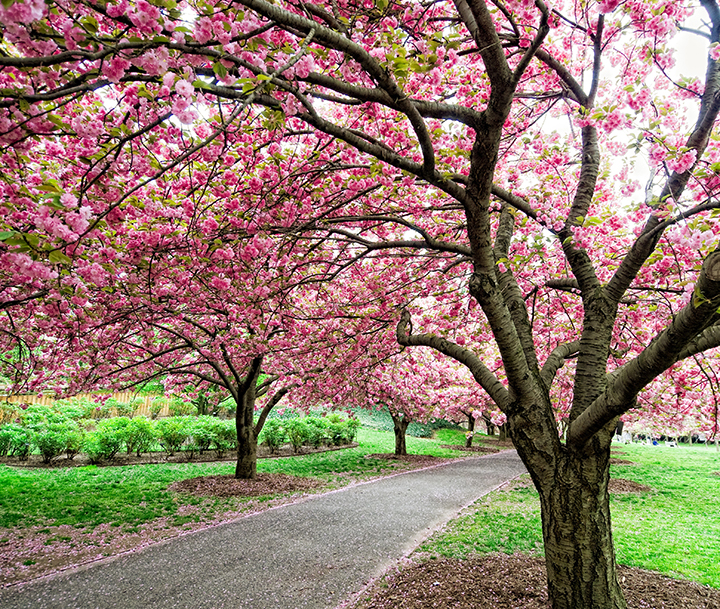 Trace the Metropolitan Museum of Art’s 150 years in New York City through this exhibition, the centerpiece of their anniversary celebration year. The Met displays more than 250 works of art of every type that played in important role in defining the museum and helping to propel it into new directions. Also included are some rarely seen archival photographs and stories of behind-the-scenes work.

This international art fair, which takes place each May, features contemporary painting, performances and photography from more than a thousand artists and around 200 of the most forward-thinking contemporary and modern art galleries from around the globe. The fair commissions artworks for the grounds in addition to hosting panel discussions and lectures from leading artists, art theorists and critics, and food from some of the best restaurants in the City. With the exception of a few pre-fair (but still related) talks and openings, it all happens inside a serpentine white tent on Randall’s Island. 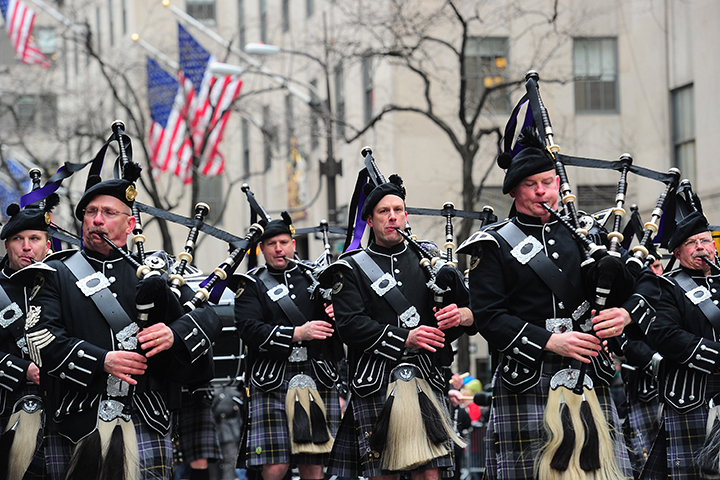 Whether you hail from the Emerald Isle is of no consequence—on St. Patrick’s Day, everyone can lay claim to being at least a little bit Irish (even the City’s bagels and beer, which go green for the occasion). The parade itself lays claim to being the oldest (it was first held in 1762) and largest of its kind in the world. So clad yourself in kelly green and watch bagpipers, marching bands and assorted revelers from near and far.

The route: The parade starts at 11am, marching up Fifth Avenue from 44th Street to 79th Street. It typically ends by 5pm.

Studio 54 needs no introduction. It’s been the subject of many exhibitions, books and films since its 1970s heyday—a time when people of various backgrounds gathered behind the velvet rope for late nights of dancing and parties. The Brooklyn Museum puts the nightclub’s influence into a broader context of NYC history, showcasing photography, film, fashion, drawings and never-before-seen illustrations, proposals and designs. 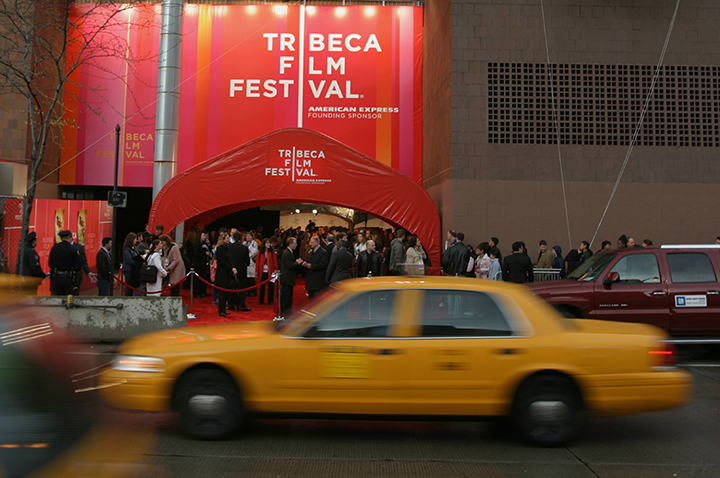 The Tribeca Film Festival—launched after 9/11 to promote the cultural and economic revival of Lower Manhattan—provides a platform for innovative filmmakers to present their latest work alongside some major movie premieres too. The 2020 program will feature films of all stripes: crowd-pleasing blockbusters-to-be, provocative documentaries, foreign films, shorts and a cornucopia of panel discussions and lectures. There are also sections of the festival devoted to TV and online programming and experiential works, including virtual reality and multimedia projects.

About Time: Fashion and Duration
May 7– Sept 7

As part of The Met’s 150th anniversary celebration, the Costume Institute presents this exhibition that highlights how fashion creates associations that blur the lines between past, present and future. Linear and nonlinear timelines help explain the relationship between time and fashion, along with clothing from the 1870s and 1880s being paired with those from more current times. Finally, the future of fashion will be touched upon, branching into subjects surrounding longevity and sustainability.

Japanese contemporary artist Yayoi Kusama brings works from her multifaceted practice to the New York Botanical Garden, along with major new works created specifically for this exhibition. Her pieces that engage with living things will be on display—including her signature mirrored environments and organic forms and mesmerizing paintings—plus a first-ever participatory greenhouse installation that will grow with the exhibition over time.

Ginger Announces The Signing Of Its Second Hotel in Guwahati

Thoughts About Depression And Suicides

Plan A Cracking Easter This Year At Atlantis, The Palm

Stiletto Nails: Do You ‘Really’ Want It?

Sucharita Maji
4
Domestic Violence during Pregnancy  “Women have a predestination to suffering"- Bela Lugosi (Two women are chatting, Place: Office canteen) Renu-OMG! (Scrolling over the phone screen) Have you...

How To Parent A Teenager With Anger Issues

New York City from Up High