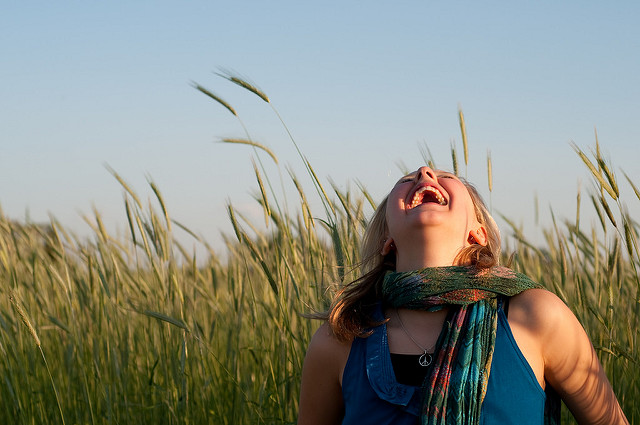 Why is laughter serious business?

‘He fell over backwards and laughed ‘is what we read in   Arabian Nights in the fantastic story ‘Ass and the Ox’. What a wonderful way to express joy! The rich farmer in the story happened to have a rare ability to understand the language of the animals was the thing that enabled him to understand the funny situation when the lazy ox that has been pretending sick over 2 days now lifted the tail and ran off enthusiastically to field. The ass who has been going to field in place of ox just had told him that the farmer is going to give off the ox to the butcher if he continued to pretend sick.

Many occasions to laugh

We get many occasions to laugh in our daily lives and we must make full use of it. I shall narrate a recent experience. We were celebrating Christmas in the courtyard of Tom’s house where a lot of friends with their families had arrived to enjoy the dinner party and the entertainments thereafter. The young girls grouped together to present a dance to the tune of a carol song. The courtyard was newly tiled. The girls were jumping and rolling to the tunes and in the end everyone applauded and congratulated. One gentleman looking down coolly said ‘just check whether any of the tiles of Tom’s floor is broken’. It was a timely joke and everyone roared in laughter. It just came on the spur of the moment and everybody enjoyed. I remembered Mollie King who said the most attractive thing in a man is the ability to make someone laugh.

In an office the only office boy was just missing almost all through the day. Everyone was asking where the boy has disappeared. After a long waiting when he finally appeared on scene there was a pin drop silence. Few of them released their breath probably a bit angry. One gentleman coolly asked ‘dear you took a long time; were you on leave travel?’ Next second all the people burst out laughing. It is probably when you mix up a quite improbable thing the fun situation develops. “Smile starts on the lips, a grin spreads to the eyes, a chuckle comes from the belly; but a good laugh bursts forth from the soul, overflows, and bubbles all around” is what Carolyn says.

Ability to keep the audience in a bit of anticipation is perhaps the zenith of skill for jokesters. It is a major achievement to covet for. I happen to know a priest who gives out speeches packed with loads of laughter and funny episodes. He is widely accepted in all types of circles and multiple forums and is loved by everyone. One day I saw him standing up on stage silent for a long minute, before he actually spoke anything and there appeared a wide smile on the face of almost every one present. This is what I meant by anticipation.

The joke has to be right

Few friends were visiting a family. The head of the family was a very serious man. He was always grimfaced and spoke much less. While talking on a couple of general matters one of us cut a practical joke and it fell on the man like a drop of water on the glass roof. But next few seconds after the lady of the house gave an explosive laugh which made everyone to join the uproar. That’s why John Cleese says “smile connects you with people. It’s almost impossible to maintain any kind of distance or any sense of social hierarchy when you’re just howling with laughter.”

One has to be of course extremely careful as to where to cut a joke and its appropriateness. A joke that can click in a class room may not find any response in a corporate meet. A joke should not be a square peg in a round hole.

From the days man lived in jungles as a huntsman he might have started pondering about this wondrous phenomenon of laughter. He probably wanted to learn how and why one is able to enjoy a joke. The magic of humor and laughter is still an enigma despite tremendous speculation, hypothesis and research. A plethora of books is available on the subject. A lot of talk on the sense of humor is going on among scientists and psychologists. .They all agree on one point that it is a key aspect of our personalities and this trait can play a strong role in weeding negative emotions such as frustration.

Brain: the seat of laughter

Scientists have discovered that genuine laughter lights up certain spots of the brain. When the focus point of a joke or funny situation is received the frontal lobe gets fully activated and starts apprehending and processing the input. It can discard which doesn’t fall within its recognition. If accepted as a laughable object, then it further proceeds to send out electrical waves through the cerebral cortex. The result is nothing short of a magic. The entire body falls under its fantastic spell and you begin to belly-laugh. And in extreme cases rollick, jump and dance in your delight, joy, and laughter.

Secret lies in the punch

Of course, in order to make your joke effective and enjoyable, one must have an idea of choice of words and emphasis to reveal the punch line. It is this wonder point that triggers the brain’s response to the joke .We have seen earlier that individual differences do exist in the perception of funny situation.

Ability to joke and having a sense of humor to enjoy whatever said in lighter vein, is a virtual tonic for mental health. That’s why we say ‘laughter is strong medicine and without laughter you could be on medicine’. It strengthens your immune system, boosts happiness, and wards off the damaging effects of tension and stress. Laughter improves the function of blood vessels and improves free blood flow, thereby protecting you against cardiovascular problems.

In a grim and explosive situation where a bomb is just ticking away, about to detonate, here comes a man with a small joke. Everybody is suddenly relieved. The red-hot terrain is now wet with due drops and all is calm and cool. Everything is flooded in the spontaneous laughter.

Use it profusely it will strengthen your relationships at home and society. In short it works as an anecdote for success and happiness in life.

Can we cultivate sense of humor?

Yes of course. Leave that philosophical look. First step is to start looking at life a bit less seriously .Remove your glasses and laugh at our own foolishness. Have courage to declare and make them laugh. Ability to joke on oneself is considered to be the zenith of sense of humor. “You grow up the day you have the first real laugh at yourself” says Ethel Barrymore.

Look for the humor even in an utter bad or negative situation, and unmask the irony, complexity and absurdity of life. And laugh aloud. Your humorous anecdote will be enjoyed and long cherished. So let us laugh as much as we can.

Jose Vazhuthanapilly,  Bsc., LLB, DBM, CAIIB    retired in 2008 as AGM from State Bank of India. He had worked as a visiting faculty in the Bank’s Staff Training Centers for 5 years. He is a writer with 20 books to his credit including 3 on self-help/psychology. He resides in Ernakulum, Kochi. He is active also in the social service. He can be contacted at Josevazhuthanapilly@gmail.com

Read More from Jose Vazhuthanapilly: GIVE THE YOUTH A DREAM TO LIVE FOR

How to Turn Comfortable Into Fashionable

A Guide To The Top Instagram-Worthy Places To Capture In Atlantis,...

How To Make A Long Distance Relationship Work

All You Need to Know About Dry Eyes Surgery

Hakkasan Brings its Award Winning Cuisine to Atlantis, The Palm

Ginger Signs A New Hotel In Dwarka, Gujarat. This Will Be...

The Risk Involved in Online Dating

Assertiveness: Your Master Key To Success