July 23, 2016 was the 3-year anniversary of my mom’s death.  Following a fall that shattered her hip, my mom’s mild Alzheimer’s progressed to the severe stage and she died just 6 months later from Alzheimer’s-related complications.

The speed with which mom’s disease progressed and the swiftness with which she was no longer the woman — the mama — I had always known . . . was a nightmare to experience.

My step-dad, Leo, lived intimately with the nightmare of my mom’s decline, day-in and day-out.  He and my mom were married nearly 43 years and were completely devoted to one another.

Leo’s and my relationship, however, often felt disconnected.  This wasn’t because of a lack of effort.  There were disappointments that were never resolved . . . and sometimes we didn’t seem to like each other very much.  Frequently, we ended up communicating with each other through my mom.

When Leo (living in southern California) and I (my mother’s only child, living in Santa Fe, New Mexico) realized how seriously ill my mom was in the aftermath of her fall, I told my step-dad that our relationship would have to change.  “We’re going to need to learn to work together as a team for mom, for each other,” I said.  He agreed completely.

After spending nearly 3 months in a rehab facility, my mom returned home to Leo, but it was a home she no longer recognized.  Her mental and physical states had deteriorated so dramatically that we needed to hire 24/7 nursing care for her.  In the brief months before she passed away, I made frequent trips to California.  In between those trips I was on the phone every day with Leo and with home-care, medical, and insurance people.

The week before she died, one of the last confidences I shared with mom was that I would look after Leo, that she didn’t need to be concerned for his welfare.  She was visibly relieved to hear this.  Mercifully, I feel it helped her let go. 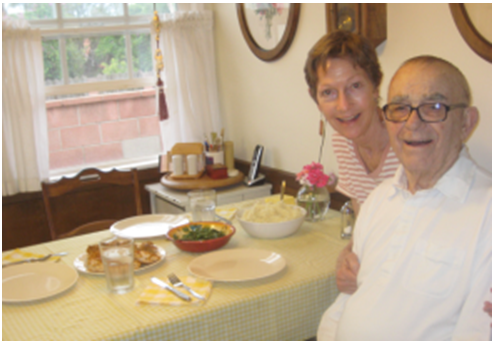 In the 6 months between my mom’s fall and her passing, Leo and I worked very closely and steadily, in-person and over the phone, to ensure she received the highest quality care and that she was as comfortable as possible.  We came to depend on one another as we’d never done before.  My mom was no longer there to act as a buffer.

As Leo and I navigated the horror of my mom’s disease and talked through our feelings of loss and fear and grief, we began to understand each other.  A new door of relational possibility slowly opened between us.

More than 3 years have passed since the door opened.  In that time Leo’s heart and mine have softened toward one another in astonishing ways.  We’ve talked every day, we’ve shared fresh aspects of ourselves, the large and small encouragements and challenges of being alive.  At times I’m sure he still must shake his head at some of my choices, and I get frustrated with his 96-year-old perceptions . . . but we see each other a little bit more clearly all the time.  We step away from judgment and more into loving acceptance, bit by bit.

A couple months ago I was preparing to visit Leo.  During our phone call the night before I left, I felt his energy shift.  A new level of honesty was present.  He said, “It’s been a long time since you were here, E.B.  It’ll be really good to see you again.”

Although those simple words may not sound monumental, I heard an unfamiliar vulnerability in them.  I felt like Leo truly needed me.  And I realized, for the first time, that I needed him.

One night after dinner when I was in California, I asked Leo about the change I sensed in his tone during our phone call.  He acknowledged that he felt it as well.  “I know you so much better now,” he mused.

I feel the same way, Leo.  I know you better too.  At the same time the respect and trust between us keeps expanding.  It’s the miracle that happens when two people show up for one another and embrace healing.  It’s the evolution of love.

How to Improve and Strengthen the Relationship with Your Family

A Huge “NO” To 5 Myths Of Cervical Cancer

How Much Weight Gain Is Normal During Pregnancy?

Marvelous Markets In Frankfurt That You Cannot Miss

Muse of the Month- Kiran Bedi

When Your Child Interrupts Your Talk

All You Need To Know About Indoor Herb Gardens

Discover the New You at niu&nau

Clap Your Hands, Keep Your Health

The Art and Science of Mindful Eating